Cloche and Dagger by Jenn McKinlay 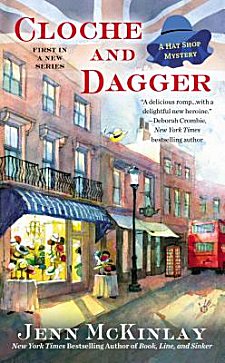 First Line: "Scarlett Elizabeth Parker, put down the MoonPie and listen to me," Vivian Tremont ordered.

Scarlett Parker's life has gone down the toilet with a video-gone-viral showcasing how she reacted to discovering that her boyfriend is a cheat. When her cousin Vivian suggests that Scarlett leave Florida and come to London while everything blows over, Scarlett packs a bag and gets on the plane. When she arrives, the handsome Harrison Wentworth is there to collect her. It seems Vivian had to leave unexpectedly. Harrison takes her to Vivian's flat above Mim's Whims, the popular hat shop on Portobello Road left to them both by their beloved grandmother. Although Scarlett thinks it strange that Vivian would leave before Scarlett even had a chance to arrive, no one else thinks anything of it. That is, no one does until one of her wealthy clients is found dead-- nude except for the cloche hat Vivian designed for her. The longer Scarlett's cousin is gone, the more interested the police become, and Scarlett knows she has to start gathering clues.

Jenn McKinlay's first foray across the pond is a success. Although her main character is half English, she's lived in the United States for most of her life, so she becomes acquainted with London at the same pace as the reader does. Once again McKinlay has created a smart, sassy woman with a sense of humor that kept me laughing out loud. Scarlett doesn't wait for Vivian's return or for someone else's invitation before she's out exploring Portobello Road and making new friends. She also doesn't wait to give dishy Harrison Wentworth a piece of her mind whenever he infuriates her (which is often).

Other characters, such as Fee the shop assistant, Wentworth, Vivian, Ferd the Bird, and her new friends Nick and Andre round out a cast that has a lot of potential. Even a reader like me who has an aversion to millinery can enjoy the information McKinlay shares about hats, their design and creation. Since this series is set in England, don't be at all surprised if there's the merest whiff of a spirit (and I'm not talking single malt).

Jenn McKinlay is one talented writer. She has me reading (and enjoying) books set in hat shops when I hate hats. She has me reading (and enjoying) books about coupon clippers and bargain shoppers when I don't enjoy shopping. This woman could probably find some way to convince me that I'm not allergic to pineapples and strawberries. I'm most definitely looking forward to reading more about Scarlett Parker and her adventures in London!