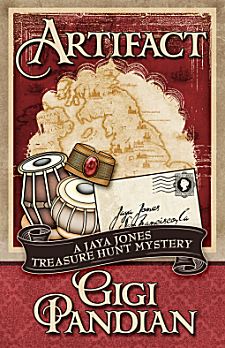 First Line: The door of the house swung open before I had a chance to knock.

Historian Jaya Jones has a lot of work to get done, but when an ex-boyfriend sends her a package containing an ancient, ruby-encrusted piece of jewelry from India, she sits up and takes notice. When she learns that the jewelry-sending ex-boyfriend has died in a car crash, she finds herself hopping a plane in San Francisco and heading to the Highlands of Scotland.

First she stops off in London to do some research, learning that a treasure dating from the time of the British Raj may be buried in Scotland. That's not the only thing she learns. She's being shadowed everywhere she goes-- including an archaeological dig in Scotland, where a member of the dig's crew is murdered. Someone is willing to kill for this treasure, and Jaya hopes to find it before she's next.

I liked Jaya Jones from the very start, especially because she doesn't take any unnecessary risks (like carrying that ancient, valuable piece of jewelry around like many another character in crime fiction would). Following her around observing her research was also a pleasure, and once the action moved to the Highlands, everything started clicking along at a fast pace.

I've noticed that Jaya Jones has been likened to Indiana Jones' sister. I wouldn't go so far as to agree, but with this fast-paced, intriguing story and strong, savvy lead character, I'd say that Jaya is well on her way. I'll be keeping an eye out for future adventures.