A Monstrous Regiment of Women by Laurie R. King 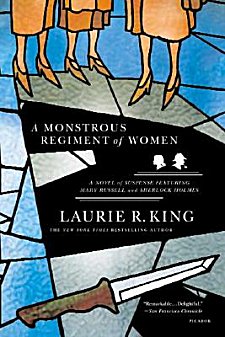 First Line: I sat back in my chair, jabbed the cap onto my pen, threw it into the drawer, and abandoned myself to the flood of satisfaction, relief, and anticipation that was let loose by that simple action.

Mary Russell has been keeping her nose to the Oxford grindstone, putting the finishing touches on an essay while her fellow students have been celebrating Christmas break. She needs a break, too, so she dons a disguise and heads to London. While there, she meets an old college friend who introduces her to Margery Childe, charismatic leader of the New Temple of God.

Part suffragette, part mystic, Childe is an electrifying speaker who is working diligently to improve the lives of poor women in London. Mary can't help noticing, however, that Childe lives very well for a woman of God from a humble background. Another thing that falls under her observant eye is the fact that life has become dangerous for the wealthy women working with Margery Childe. This calls for an investigation, especially since Mary is now part of the "inner circle," and about to come into her own considerable inheritance.

My infatuation with Mary Russell and Sherlock Holmes continues in this second book in Laurie R. King's series. First of all, A Monstrous Regiment of Women is a marvelous title that sticks in the mind like a burr. The title comes from Bible thumper John Knox, the equal opportunity hatemonger. (From what I've read, I doubt the man ever cracked a smile.) Knox was notorious for his misogyny, and King has rounded up quite a collection of quotes from Knox and other men with similar beliefs to head each chapter in the book. It wasn't unusual for me to read the quote at the beginning of a chapter and have some unladylike response to it before diving headfirst back into the story. Furthermore, the quotes aren't there just for decoration or to cause blood pressure spikes-- they follow the narrative of the story, and I soon became quite eager to see what the next quote would be.

Mary is now a young woman who's about to come into a very large sum of money, and she struggles a bit with the burden of responsibility this places upon her. She also has a newborn sense of freedom and begins to think about the relationship she has with Holmes. This book (as well as the first one, The Beekeeper's Apprentice) is so much more than a recitation of facts about cases the two detectives have solved, and this is all due to Mary's narration. She focuses on personal matters and on the people involved, so readers can really get a sense of whom the characters are and why they are involved.

Mary has the lion's share of the scenes in this book, but Holmes' presence is felt throughout. Never once did I forget that this man is "the world's greatest detective," but it is refreshing to see him in a totally different light. Mary is his equal in mind and in heart, and I love watching the relationship between these two growing into something very, very special.

Just in case you get the impression that A Monstrous Regiment of Women is a mere character study, think again. The case is an intriguing one that is difficult to sort out, and Mary is in very real danger towards the end. In fact, I think I was reading so fast that my eyeballs almost caught fire.

I love the world that Laurie R. King has created. I now have all the books, and I fully intend to savor each and every one. If you have yet to sample this series, you have a wonderful treat in store for you. In order to achieve the greatest amount of enjoyment, I would suggest that you read the books in order. The way the relationship between Holmes and Mary Russell unfolds is a delight.