The Devil's Cave by Martin Walker 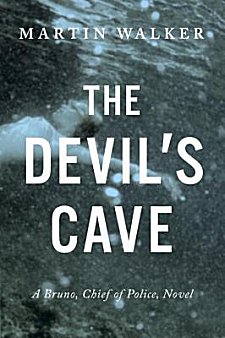 First Line: Bruno Courrèges  seldom felt happier about the community he served as Chief of Police than when standing at the rear of the ancient stone church of St. Denis, listening to rehearsals of the town choir.

When a dead woman is found in a boat floating down the river, it disrupts Easter preparations in St. Denis, a small village in southwestern France. With strange markings on the body and black candles in the boat with her, Chief of Police Bruno Courrèges knows he's just been put in charge of an investigation which has some very sinister overtones. With whispers about the occult beginning to circulate in the village, Bruno soon finds out that there's more going on than that. There's a questionable real estate deal in the works, a second violent death that someone took great care to make look accidental, and the presence of an elderly countess considered to be a hero of the Resistance. As his list grows, Bruno will find out that many of them lead directly to the Gouffre de Colombac-- the place locals call the Devil's Cave.

When I read one of the blurbs on the back of my UK edition of this book, I had to laugh. A reviewer referred to Walker's Bruno, Chief of Police series as "gastroporn"-- and it is. Food plays a very important role in each and every book, and it is described in such loving detail that just reading about it is a feast for the senses. These books are also feasts for anyone who wants to learn about life in a French village. Bruno is my type of police officer. He's experienced war, he's experienced life in big cities, and life in tiny St. Denis suits him right down to the ground. He's where he wants to be, and most of his excellent policing is carried out swiftly and well simply because he's made the effort to be a part of the community and to know all its people. The only thing Bruno is missing is a wife and family, and his love life is just as complicated in The Devil's Cave as it has been in the other books in the series.

This investigation had me learning a bit more about the occult; however, once again it is the area's strong ties to World War II and local Resistance activities that provide the mystery its backbone. Some secrets take many, many years to uncover, as they do here in The Devil's Cave with some very nerve-wracking events occurring underground.

Although I greatly enjoyed this book, it just didn't have the richness of the others in the series. A few too many secrets were easily deduced, and there wasn't as much of the humor and charm that I've grown to love. Do I recommend the book? Yes, I do-- in fact, I recommend the entire series. Of all the mystery series I read that are set in France, this one by far is my favorite.

Police Procedural, #5 Bruno Chief of Police mystery
Rating: B
Source: Purchased the UK edition published by Quercus at The Poisoned Pen.
by Cathy at Thursday, July 11, 2013