@ The Poisoned Pen with Timothy Hallinan!

When I walked into The Poisoned Pen last Wednesday, I bought a book and chatted for a few minutes with Patrick Millikin, who let me know that he would be interviewing one of my favorite authors that evening, and that the author-- none other than Timothy Hallinan himself-- would be arriving early. Denis and I got comfy and our noses were soon stuck in our books, but I have to admit that my nose kept popping up and checking on the entrance to the best bookstore in the Phoenix metro area. I didn't want to miss his arrival... not that I was going to pounce on the poor guy or anything.

A while later Tim walked in and said hello to Patrick and Ariel. Once the pleasantries were out of the way, the very next words out of his mouth confirmed that Timothy Hallinan is my kinda guy. What did he ask Patrick? "If you could recommend just one book to me, what would it be?" (The answer was Philipp Meyer's The Son.)

"Eat these. There are children starving in China."

Hallinan lives part of the year in Thailand, where his Poke Rafferty series is set, and the rest of the year in California, where his Junior Bender series takes place. When Millikin asked him, "Why Asia?" Hallinan told us that he followed in his father's footsteps.

Tim's father had an uneasy home life. When he reached the age of 17, a plate of steamed carrots was placed before him with the order, "Eat these. There are starving children in China." It was the last straw. The young boy got up, found a container, walked back in and dumped his plate of carrots into the container. "What are you doing?"  "I'm going to China," Tim's father replied. And he did, although time turned the carrots into a revolting mess and they were tossed overboard well before the boy reached his destination. Tim's father stayed in China until the Communists took over.

The first time Tim went to Southeast Asia was for a PBS documentary. Blissfully unaware of the vast difference in climate, he stepped off the plane in hot, steamy Thailand dressed in a heavy down jacket and a hat with ear flaps.  The first person Tim saw was an immigration officer who'd taken one look at Tim and cracked up laughing-- quite a departure from the grim airport officials he'd seen every place else. From that moment, Timothy Hallinan began falling in love with Thailand.

Tim's travel agent made reservations for him at the Ramada in Patpong because she thought it would be safe. Little did she know that Patpong is a district in Bangkok that looks like a prim and proper business area during the day and turns into one of the most famous red light districts in the world at night.  Tim was going to settle in and write a book, but first he needed some food.

He found his way to the Tip Top Restaurant (Italian), where he was served by the "waitress from heaven." (He had yet to learn that all waitresses in Bangkok are like that.) Extremely pleased with the service he'd received, Tim left money on the table to cover his meal and include a $7 tip for the waitress. Walking down the street, he heard a commotion and turned to see what was going on. His waitress, believing that he'd left too much money by mistake, had chased him all the way down the street to give it back.  "Here it is-- my first night in Bangkok-- and I'm in the red light district being chased by a woman who wants to give me money!"

One day found a hungover Tim at the Tip Top reading an Anne Tyler novel. One perfect scene in the book made Tim burst into tears at the beauty and power of Tyler's writing. His booth immediately filled with concerned waitresses. Unable to understand why Tim was crying, one of the women found a bank teller who understood English. The bank teller translated the scene into Thai and read it to the women-- who all promptly burst into tears, too.

The character of Poke Rafferty is a travel writer. Tim knew that travel writers view other cultures as though they're looking through a department store window: they see what they want, grab it, and leave. Hallinan believed that he could write Poke because Poke would never have to learn the Thai culture. That comment made us all smile because, as diehard fans of that series, we know how deeply involved Poke is in the culture. We also know that, although the books are primarily considered thrillers, they're anything but. The most important thing in the Poke Rafferty books is the relationship between Poke, his wife Rose and their adopted daughter Miaow (who is based on a real Thai street child that Tim knew).

On publishers, writing, and Junior... 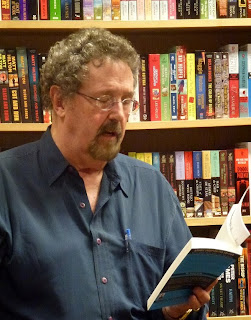 So many times during these author events, gems are tossed out so rapidly that I wish I'd taken shorthand in high school. This was one of those nights. I caught a few, and I'll toss them out so that all of you can enjoy them, too:

The day after Hallinan was dropped by his publisher, he was nominated for an Edgar award (for The Queen of Patpong).

He wrote nine books before he wrote a scene with two women alone in a room.

He was able to sell his house in Venice, California, at the top of the market, which means that-- although he's nowhere close to being rich-- he can devote himself to his writing. (I know I'm not the only person who's happy about that!)

The first two albums by Bread have songs on them that Hallinan wrote.

He wrote the first Junior Bender book, Crashed, entirely for himself. In the midst of writing the third Poke Rafferty book, Breathing Water, Hallinan began to hear a voice that just wouldn't leave him alone. Finally, he cleared two days to sit down and write that voice out of his system... and that was the birth of Junior Bender.  Junior is fun. "My computer was smoking because I was typing so fast, and I was laughing my head off as I typed," Tim remembers.

When he approached his publisher with his newest creation, he was told, "You're not known for comedic crime fiction." Hallinan couldn't believe his ears and replied, "What do you mean? 90% of crime fiction readers don't even know I'm alive!" In the end, he decided to put the first three Junior Bender books out as eBooks, since that format was not against his then-current contract. Tim seemed rather puzzled as to why his readers started begging for more than three books about Junior, but it's no mystery to me-- anytime I read articles about the books, they were referred to as a trilogy, or that there were only three. To any of the rest of you who love Junior Bender, private investigator to the crooks of Los Angeles, I bring glad tidings: Herbie's Game is the title of the fourth book in the series, and it's all about how Junior became a burglar!

Tim told us, "Villains have a special kind of energy, and this is my chance to write books in which all the characters are villains." Lion's Gate has purchased the rights to the Junior Bender books for global cable television. It will be interesting to see what they do with Hallinan's wonderful characters. He did not retain any rights, mostly because of the experiences he's had with companies trying to develop the Poke Rafferty books into film. Three attempts have been made to make Poke a film star, and all three have failed. None of the screenplays Tim read could get Miaow's character right, turning her into a run-of-the-mill smart-mouthed sitcom kid. Besides, Tim admits, "Reading those screenplays made me feel like my characters were cheating on me."

He also divulged the title of the upcoming Poke Rafferty book-- For the Dead-- which is about a thirteen-year-old girl who loses everything and how she begins to put her life back together.

Which brings me to the seven-year-old street child who sold gum on the streets of Bangkok. Tim would take his laptop to the Tip Top restaurant to work, and this little girl was fascinated with it. He had a pinball game installed on the laptop, and in no time at all, the child had mastered it. "She's one of the smartest kids I've ever met," Tim said. "She disappeared when she was around the age of eleven, and I never saw her again." I knew that all of us at The Poisoned Pen hoped against all the odds that things had turned out well for the girl-- and that we would read the next Poke Rafferty novel and see the character of Miaow in a new light.

Time ran over that evening, but none of us cared. Tim is such a smart, funny, and giving man that I think we all felt as though we'd made a new friend. Meeting Timothy Hallinan makes his books even more special.