Grilled, Chilled and Killed by Lesley A. Diehl 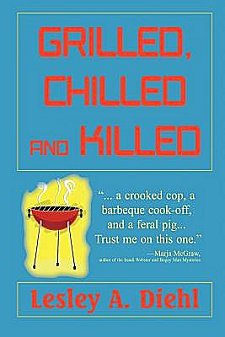 First Line: Emily shook the metal canister filled with ice, liquor and mix until her hand numbed from the cold.

Emily Rhodes, a retired preschool teacher, lives in rural Florida and works as a bartender to supplement her small pension. To make a little extra money, she agrees to work at a local barbeque cook-off. When she finds a dead body covered in barbeque sauce in the beer cooler, she decides to stay out of it and let Detective Stanton Lewis do his job. Well... until she finds out that his idea of whodunit is just plain wrong. Lewis is so condescending toward her that Emily packs up her theories and starts doing her own snooping. With a crooked cop muddying the investigative waters, it's anyone's guess who's going to be declared the winner in solving this case: Detective Lewis or Emily Rhodes.

The very first things that grabbed me about Grilled, Chilled and Killed were the characters and the author's sense of humor. You learn the major characters' histories as you go along-- finding out what events shaped their lives and make them react the way they do to other people's behavior and to the action as it unfolds. Also, Emily is different from the normal cozy amateur sleuth because she gave her daughter Naomi up for adoption at birth. They are now forging a relationship, and that adds an interesting element to the story.

Emily has two men interested in her: Detective Stanton Lewis and her boss, Donald Green, a man who never met a bass he didn't like. (We're talking fish here, folks.) Both men have a tendency to rub her fur the wrong way, but with the amount of arguing she and Lewis do, you know the chemistry is sparking between them. The romantic element of the book adds spice and doesn't detract from the story one bit, although I do hope Emily and Lewis tone down their squabbling a bit in future books.

A lot of the humor that I appreciate so much is done in flashes: a descriptive phrase here, a small laugh-out-loud funny scene there. For instance, Emily decides that questioning suspects in restaurants isn't a good idea because she seems to be gaining weight; one person wears a shirt that's had "too many meetings with Maytag"; and Detective Lewis has a run-in with an old hound that will make you laugh a few pages later. Humor can be difficult to pull off, but Diehl does it very well.

The villains are good ones, too. They have different agendas, which (as Poirot would say) makes the reader fire up the little grey cells in an attempt to deduce what's going on and why. Emily flirts with danger at one point, and her fear is palpable. What makes that entire section work is the fact that she doesn't allow herself to become so frightened that she can't think of ways to get out of the situation. I like my heroines feisty and smart, and that's Emily Rhodes in Grilled, Chilled and Killed.

Good characters, good humor, good story. I'll be heading to the Big Lake country of Florida again. Why don't you meet me there?