Back at the end of 2011, a publicist asked me to read a book called The Informationist about a very strong, very unusual character named Vanessa Michael Munroe. Munroe is rather androgynous in appearance, has a surreal knack for learning languages, and sells information for a living.

Because most human beings love to put  labels on people and stick them into pigeonholes, lots of reviewers and publicists drew comparisons between Munroe and Stieg Larsson's Lisbeth Salander. Although I would hate to have either woman after me (there's no hole deep enough to avoid their wrath), the similarities between the two are few and fleeting.

I have enjoyed the character of Munroe through two books now, and when I learned that author Taylor Stevens was making her first appearance at The Poisoned Pen to promote her third Munroe book, The Doll, I knew I wanted to go. However, the day of her appearance was Denis's birthday, and Stevens is an author he's not read and knows nothing about. Would he want to go? What can I say? The man loves to read, he enjoys author signings at The Poisoned Pen, and when I topped it all off with a celebratory Italian dinner, all Denis said was, "When do we leave?"

With store owner/host Barbara Peters and her husband touring Spain and Portugal, Patrick Milliken brought Taylor into our circle of fans and asked her for a little background about her books and herself. The smiling woman proceeded to do just that, her words bubbling up rapidly and tinged with just a bit of nerves.

Describing her character Vanessa Michael Munroe as a "kick ass heroine" with a savant-like capability of learning languages, Stevens went on to say that Munroe was born and raised in Africa and had an abusive childhood. The Doll is Stevens' third book about this character, and it has a complicated history. Munroe has "a few rage issues," said Stevens. "She's a survivor," Milliken clarified. When asked about her own background, Taylor swiftly began filling in the details of her own life because when it comes to her main character, there is a touch of autobiography.

Taylor Stevens grew up in a religious cult that moved all over the world. She had no formal education past the sixth grade and used to invent stories to tell the other children. When she finally escaped the cult, she was 29, married, and had two babies. After spending a year in Europe to straighten out a problem with green cards, she and her family moved to the Dallas, Texas area. To supplement their income, she would buy things at garage sales and resell them on eBay. Having long been a fan of Robert Ludlum and Jason Bourne and bored out of her mind at home with the babies, Taylor Stevens began to write.

Clearly wanting to move on from her own personal history to her books, Stevens then told us that "The Innocent is a true story-- not 100% my story, but the story of hundreds of us. The media has had this story for 35-40 years and has done nothing but sensationalize it."

Her latest book, The Doll, is the third in the series. A friend gave her the idea for the book when she asked, "What if Munroe is the victim, not the rescuer?" After rescuing someone out of a cult in The Innocent, Vanessa Michael Munroe now finds herself kidnapped off a busy street and in an underground world where women and girls are merchandise.

"Before I began researching human trafficking, I believed prostitution should be legalized," Stevens said. "Afterwards I knew that the only way to stop human trafficking is for everyone everywhere to know sex is not something you can pay for. When there's no longer a market, humans will stop being merchandise." 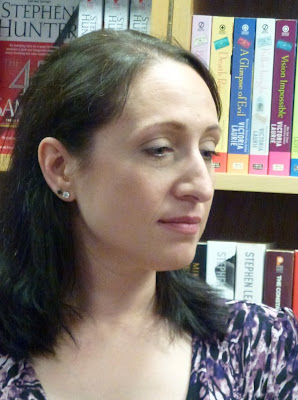 Taylor Stevens has to constantly field questions about her life in a cult, and I felt quite a bit of empathy for her. Milliken asked her, "Do you still feel like an outsider?" to which she replied, "I'm not a soccer mom, and I live in Soccermomville. I relate more easily to people who are more well-traveled. If you've never left the USA, we're just not going to become friends."

When it came time for questions from the audience, Stevens finally reached a point where she tired of cult queries and told us that we should read The Innocent: "If you read it in The Innocent, it's true. It happened!"

Taylor Stevens told us of an instance where someone told her, "You say you only have a sixth grade education, but I've read your books, and I don't believe you!"  Stevens looked out at us, shook her head, laughed, and said, "If you'd read my first drafts, you would!" She's also received emails from women who tell her that their therapists have suggested that they read Stevens' books.

Stevens does have ideas for standalone novels, but none of those ideas are for thrillers. (Which definitely intrigues me!) She's committed to five Munroe books. After that, we'll just have to see what happens.

This effervescent woman isn't pleased with the commercial hooks that publishers have been using to link her Vanessa Michael Munroe to Stieg Larsson's Lisbeth Salander. One fan told her that he wanted to see Lisbeth and Munroe in a fight. Stevens doesn't think there would be a fight. She thinks the meeting would be more comparable to a meeting between Jack Reacher and Jason Bourne-- they're not going to fight each other; they're more liable to band together to pool knowledge and resources... and to make the person responsible pay. (I like the way she thinks!)

Taylor Stevens' biggest news that evening was that she's done a movie deal with James Cameron, who now has rights to all her characters in perpetuity. "I sold out, but I think I sold out to the best possible person."  She then went on to say that she hopes an unknown actress will portray Munroe-- and I distinctly remember unfavorable comparisons being made by many of us to the casting of Tom Cruise as Jack Reacher.

It was an interesting and informative evening, and Denis and I are so glad that we went. This is one of the few times in which the author's life is every bit as fascinating as the life of the character she's created. As much as I can see why Stevens would be sick to death of answering the same questions over and over about her life in a cult, I can see why people want to ask them. However, if I'm ever in her vicinity when she's asked those questions again, I'll be quick to add my two cents and say, "Read The Innocent!"