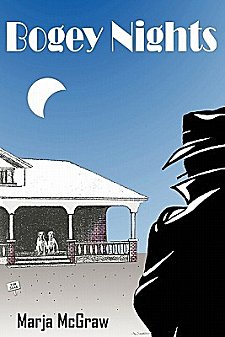 First Line: The far off cry of the sirens turned into a frantic wail as they neared Good Joe's Honky Tonk, sending a chill down my spine and panic rising up my throat.

Pamela Cross is right to feel that panic. She and her husband Chris have just watched their 1940s-themed restaurant burn down to the ground. Fortunately they quickly find an old house that can be converted to a new forties-style eatery and hope that their chef as well as the wait staff and the band that provides the live music will still be available when the new place opens.

Renovations are progressing at a good pace until a body is discovered, buried in the basement of the old house since 1943. With no business to run at the moment, Chris and Pamela have plenty of time to do a bit of research into the old murder-- with the blessing of an overworked Detective Janet Riley. With the best of babysitters in Constance Hargood, the couple can have peace of mind that their son, seven-year-old Mikey, will be well taken care of while they're playing private eyes. What they don't realize is that-- even though all the suspects may be old-- they can still be deadly.

I was in the perfect mood for this fun-loving book. Yes, Pamela and her Humphrey Bogart lookalike husband Chris play amateur sleuths, but they don't ignore everything else in their lives. In fact, I think the author's depiction of her characters' family life was one of the things I enjoyed most as I read Bogey Nights. Their two dogs Sherlock and Watson have a piece of the action, they make friends with Detective Riley and her dog Friday, they deal with Mikey's adventures at school-- and they keep up with all the hundreds of details involved in getting a new business up and running. In so many of the mysteries I read, I never get a true feeling of family or "connected-ness" with the characters. It's almost as if they have no lives outside of solving crime. Not so with Pamela and Chris Cross, and I was surprised at how refreshing that is.

The mystery is a corker, with plenty of twists and turns, but I thought I had it all figured out as I turned the pages. Then I had that moment... that moment when a reader has a light bulb go off over her head with a glaring neon sign that flashes, "Hold the phone, cupcake. You're not as smart as you think you are!" Sure enough, I had plenty of things figured out-- but not the most important one.

I was also pleasantly surprised at the relationship that the couple had with the detective on the case-- even to the point of their becoming friends. I did become concerned with the amount of work Janet Riley was allowing them to do, but McGraw addressed my worries very nicely by book's end.

If anything at all bothered me about Bogey Nights, it was the overuse of two idiosyncrasies. Pamela has a tendency to roll her eyes (I do that rather well myself), but there were times that she did it so much that I was afraid her eyes would get stuck in the back of her head. And Chris? Maybe it's because I've never been a Humphrey Bogart fan, but Chris just turned that upper lip of his under too much. Looking like Bogey? Fine. Talking like Bogey? No problem. Using 1940s slang? Copacetic. But please don't wear that lip out, Chris. You're going to need it! However, those were very minor annoyances that didn't take away from my enjoyment of the book. In fact, I'm going to be looking for the others in this series!