The Tooth Tattoo by Peter Lovesey 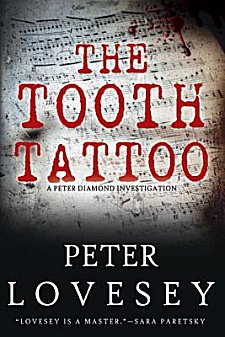 First Line: Eleven-thirty at night, sweaty in his evening suit and shattered after a heavy night playing Rachmaninov, Mel Ferran plodded out of the artists' exit on the south side of the Royal Festival Hall.

Things are a bit slow for the Criminal Investigation Division in Bath, England, so when the body of an unidentified young woman is pulled from a canal, Peter Diamond, the head of CID, puts everyone to work to discover the woman's identity and how she died. In this day and age of budget cuts, he knows it's not a good idea to have any of his superiors wander in and find his people twiddling their thumbs or playing games on Facebook.

The only clue to the woman's identity is a tattoo of a musical note on one of her teeth, and it is soon learned that she was murdered. Now, Peter Diamond wouldn't be able to tell you the difference between a violin and a tuba, so having an investigation veer off into highbrow music is going to be tough-- especially when a certain classical string quartet comes under CID scrutiny.

This is a ripping good yarn, and watching it unfold is an absolute treat. It's laced throughout with subtle irony and sarcasm, which will delight some and go right over the heads of everyone else. Lovesey conducts his tale masterfully: first handsome young Mel Ferran is center stage with the theft of his viola, then Diamond takes the stage on holiday with his lady love. The body of the dead woman is found; we move to the mysterious quartet.... Point and counterpoint. Peter Lovesey is the Leonard Bernstein of crime fiction.

Did I care that I deduced the killer early on in The Tooth Tattoo? No; I merely chalked it up to my innate suspicion of certain types of people. Knowing whodunit didn't bother me a bit-- because I was having so much fun watching Peter Diamond at the head of his troups. Lovesey has a way of constructing his stories that makes the reader feel like a part of the action, like one of the "gang." Not many writers have that sure, light touch, and it is to be appreciated wherever it's found.

I, for one, intend to appreciate it each and every time I pick up a novel by this talented man.

Police Procedural, #13 Peter Diamond mystery
Rating: A
Source: the publisher
by Cathy at Thursday, May 02, 2013