The Night Detectives by Jon Talton 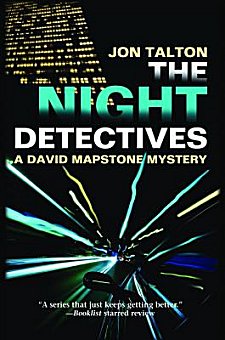 First Line: The dead talk to me in my dreams. When I wake up, I can't remember what they said.

The elections are over, and there's a new sheriff in Maricopa County. Former Sheriff Mike Peralta and his friend and Deputy David Mapstone are out of jobs-- but not for long. Trouble is, their fledgling private detective business doesn't start out well. Not only does Mapstone not want to take their first case, their client is gunned down in the parking lot moments after hiring them. Peralta decides to carry on with the case, the suspicious death of a young Arizona woman who fell to her death from a San Diego highrise.

In San Diego, the two new private eyes find the woman's boyfriend who's trying to take care of their baby. He doesn't think his girlfriend committed suicide either and hires them to look into it. Before the day is out, the boyfriend is dead and Mapstone is nearly killed. They may not carry badges anymore, but Peralta and Mapstone are still up to their necks in danger.

Although-- like all well-written series novels-- you don't have to read the rest of the books in the series for this latest installment to make sense, I'm more than happy to tell you that I'm a long-time Talton and Mapstone fan. Jon Talton is one of two writers I depend on for an accurate portrayal of the Phoenix metropolitan area. If setting is important to you, Talton's Phoenix is the real deal.

He also writes a lean, mean mystery that is both action-packed and introspective. More than once while reading The Night Detectives, I thought I had it all figured out only to find that I didn't. I like that.

I like Talton's setting, I like his stories, but more than anything else, I like his character, David Mapstone. It's been a pleasure to watch this character develop through each book in the series. In The Night Detectives, Mapstone is in a very dark place emotionally. Loved ones have died tragically. He is separated from his wife and despairs of their ever getting back together. He's lost a job he loves. He's got a lot on his mind that he'd rather not dwell on, but no matter where he goes, he can't escape his thoughts. Even his home-- once his sanctuary-- has turned into a place he wants to avoid.

The only thing I don't like about David Mapstone is that it always seems to be summer in Phoenix when he's at an emotional low, and when he's depressed, he whines about the heat. But what's a little whining from such a nuanced character in such a marvelously told tale? Since Talton's first Mapstone mystery, Concrete Desert, I've been recommending this series. The only thing The Night Detectives has done is to make me more insistent in my recommendation.