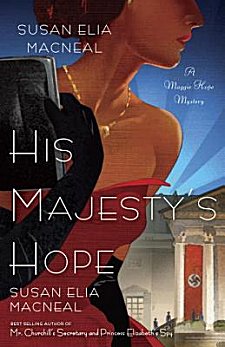 First Line: The urn the ashes came in was beautiful-- shiny and black, with an enamel swastika on one side.

Since protecting Princess Elizabeth at Windsor Castle, Maggie Hope has been training as a new member of the Special Operations Executive, an elite black ops group whose mission is to aid the British war effort abroad. Maggie's first mission as a part of the SOE? To parachute into the heart of Germany to deliver badly needed supplies-- and to plant a listening device in the Berlin office of one of Hitler's trusted advisors. She will be the first female spy sent across the Channel. While in the Nazi capital, she takes the opportunity to gather information to pass on to SOE headquarters in London. The information she uncovers exposes an even more malevolent side of Nazi policy and puts her-- and others-- in mortal danger.

After the high octane conclusion to Maggie's last adventure in Princess Elizabeth's Spy, I assumed that there would be more of the same. There wasn't-- and that's not a bad thing. What this book may lack in nail-biting, rapid-fire action, it more than makes up for in Maggie's undercover work as a spy. Let's face it: all that action and chasing and running around would spell a quick ending to Maggie's career as a spy, and I definitely would not like to see that happen.

The action may be toned down slightly, but MacNeal shows readers the very real danger people faced if they opposed Hitler's policies. She does this by introducing several fine new characters. There is a Gentile woman married to a Jewish doctor, a German secretly fighting as a member of the Resistance, and a gifted young nurse whose mother is a high-ranking member of Hitler's team of wizards. Permeating the entire story is the evil of one of Hitler's lesser known plans that was carried out in German hospitals.

Maggie continues to grow in these books. She's not the weak-limbed, naive young girl she was at the beginning. She's gone through rigorous physical training and has even more opportunity to use that keen mind of hers to piece bits of information together. Her impetuosity has been tempered a bit, probably because she's more capable of recognizing her own mortality. In addition, she learns even more about her past because three members of her family figure quite prominently in the story.

Susan Elia MacNeal brings war torn Europe to life through her characters. His Majesty's Hope stands alone well, but it would be a shame for you to miss any part of Maggie Hope's adventures. I'm looking forward to discovering what this strong, intelligent woman will be up to next.