The Leviathan Effect by James Lilliefors 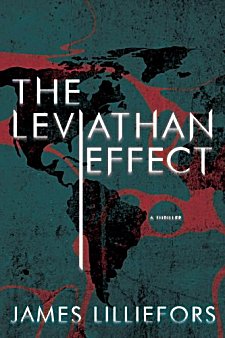 First Line: Dr. Atul Pradhan had just poured himself a cup of black tea when he heard what he thought was distant thunder.

If you're in the mood for a fast-paced tale of science running amok, consider picking up a copy of The Leviathan Effect, the second thriller from author James Lilliefors.

Catherine Blaine, Secretary of the Department of Homeland Security, receives communication from a hacker named Janus that throws her right into the depths of a nightmare. This message is the latest in a series that has been correctly predicting natural disasters around the world. Janus claims that these disasters are not natural but manmade, and if the United States doesn't follow Janus's instructions, a Category 5 hurricane will hit the East Coast and destroy the lives of millions of people.

Off in his own little world, investigative journalist Jon Mallory has been given a list of seven prominent scientists who have disappeared over the past decade. When the person who gave him the list disappears herself, Jon brings his brother Charles-- a private intelligence contractor-- up to speed on the story, which makes Charles a very sought-after man indeed, since Catherine Blaine also wants his help in uncovering this threatening new weather technology.

For the most part I prefer mysteries with rich characterization and plots that unfold gradually, but now and then I just can't resist a fast-moving story loaded with lots of action and technology. The Leviathan Effect delivers. Weather has always fascinated me, and Lilliefors's description of the technology developed to control it was not only plausible but downright chilling. Even more chilling was the person holding the purse strings and his motivations for wanting this sort of capability.

Just when everything seems to be wrapped and tied up with a big pretty bow at story's end, the author throws in a nice cliffhanger, promising more action to come. This made me smile, and I doubt that I'm the only reader to do so. It may not be wise to fool (with) Mother Nature, but it's also not wise to gloss over the warnings given by a villain who's proved he can more than carry out his threats. I look forward to the next appearance of Charles Mallory with eager anticipation.