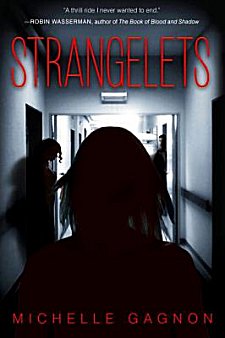 17-year-old Sophie lies on her deathbed in California, losing a long battle with cancer. 17-year-old Declan encounters two armed assailants in an alley in Galway, Ireland. 17-year-old Anat finds herself in a booby-trapped tunnel between Israel and Egypt. All three strangers should have died. Instead they wake up in an abandoned hospital-- and they're not alone. These teenagers find that they are going to have to work together to find out what is happening and how they can get back home.

This book is fast-paced and has a very intriguing premise, which I'm not going to spoil by trying to explain any part of it to you. But what could have been a good, fun read turned into one that was rather mediocre. The characters seemed right out of Central Casting, with the pretty, nice girl; the streetwise, handsome boy; the suspicious, kick-ass girl; the handsome, privileged boy; and the strange one that none of the others can figure out. After making their way out of the hospital, seeing all the changes in the world around them, and trying to find a parent who lives in the area, none of the teenagers seemed particularly quick on the uptake either. None of them pieced the facts together, and they had to be presented with the truth.

Strangelets had good pacing and an interesting storyline, but the characters let it down. All in all, this was an average read and not quite my cup of tea.