Scene of the Crime with Author Peter May!

I am one of those readers who feels most comfortable with a huge cache of books waiting to be read. Building that cache is a labor of love in many ways, and mine contains the books of dozens of new-to-me authors that I'm sure I'll enjoy. The trouble is... some of those authors can languish on the shelves for way too long. This week's featured author is a case in point.

Peter May was born and raised in Scotland and now lives in France. He won many awards in television there before leaving to concentrate on his first love, writing. He's written several standalone novels as well as two series, one featuring Chinese detective Li Yan and pathologist Margaret Campbell which is set in China, and the other which features Enzo Macleod, a Scottish biologist living in southwest France. I have books in both series in my "cache," but it wasn't until I heard about May's trilogy set in the Outer Hebrides that I finally committed to reading him. Now I could kick myself for waiting so long. The Lewis Trilogy is superb, and if you come back tomorrow, you'll be able to read my review of the second book in this award-winning series, The Lewis Man.

As always, I've done a bit of research and found a few links about this very talented man that I'll share with you now:

Let's not waste any more time-- on to the interview!

I can't remember the title of the book.  It was one I had to read and answer questions on to earn one of my Boy Scout badges.  It was set in Finland at the time of the Russian invasion in 1939.  It was about a group of boys in their mid to late teens who went underground to fight the invaders.  It was the first time I became aware of world politics - I was still at primary school.  It fired both my imagination and my indignation, and I found myself able to step into the shoes of those boys and imagine how I would have felt if someone had invaded my country.

My hometown is Glasgow, and I haven't been there for so long, I'm not sure now what to recommend.  Probably a visit to the Burrell Collection.   This is a collection of art and artifacts put together during a lifetime by one man, Sir William Burrell, a Glasgow shipping magnate.  In his 1944 will he left the collection to the city.  For decades it languished unseen in the cellars of the city's Art Gallery until a special building was constructed to display it.  It includes work by major artists such as Rodin, Degas, and Cézanne, as well as late medieval art, Chinese and Islamic Art, Ancient civilisations and more.  It is the greatest collections ever created by one person - consisting of more than 8000 objects. 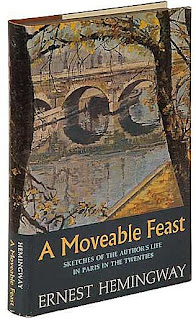 A Moveable Feast by Ernest Hemingway, because it was seminal in motivating and inspiring me to write.

I had just driven back to Scotland from a holiday in France and the letter from the publisher was awaiting me.  Quite unexpectedly.  I sat stunned for quite a while, then had a glass or three of wine to celebrate.  The first time I saw it on a shelf in a bookstore I moved it to a more prominent position. 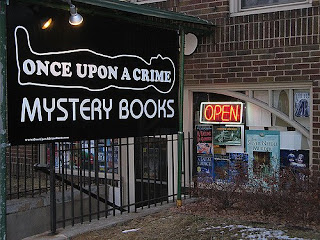 If I were in the States, probably Once Upon a Crime in Minneapolis.  Great people, great little store.

Thank you so much for spending this time with us, Peter. It was a pleasure to be able to get to know you a little better.

Don't forget to stop by tomorrow to read my review of The Lewis Man. It's one of the best books I've read this year!

Email ThisBlogThis!Share to TwitterShare to FacebookShare to Pinterest
Labels: Author Interviews, Peter May, Scene of the Crime