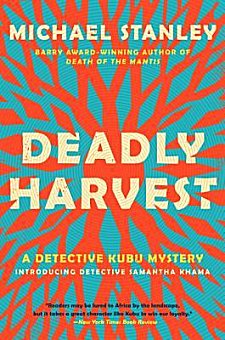 First Line: As she walked home, Lesego's head was full of Christmas.

Assistant Superintendent David Bengu of the Gaborone Criminal Investigation Department (known by everyone as "Kubu") has barely had time to make the acquaintance of the CID's first woman detective, Samantha Khama, when his superior tells him he needs to devote his time to a death threat on a popular political candidate. Samantha seems to be a bright, very intense young woman who's determined to focus on crimes against women. Since Kubu now has very little time to mentor her, he agrees when she asks to be put in charge of a cold case concerning missing women and children. In quick succession two young girls go missing after being seen getting into cars, and the political candidate is murdered. Kubu and Samantha have their hands full-- and what neither of them realizes is that their cases will entwine. There is a powerful, and very deadly, witch doctor at the heart of both their investigations.

Every voracious crime fiction reader loves to be in at the start of an excellent series and watch it improve and flourish with each subsequent book. That's exactly what's happened with the Detective Kubu series penned by the talented writing team of Michael Sears and Stanley Trollip.

Their series is set in the fascinating country of Botswana, familiar yet so very different from the Botswana of Alexander McCall Smith's Precious Ramotswe. As Kubu interacts with other characters, we learn of the traditions, customs, foods, and land in which the books are set.

During the investigations of Deadly Harvest, we become more familiar with the political climate as well as muti, a type of traditional medicine widespread in southern Africa. Unfortunately some witch doctors resort to the use of human body parts in the making of their medicines and potions, and stopping this horrendous practice is a driving force in the book. It's the skillful weaving together of the cold case and the murder of the political candidate that builds suspense to such a point that I still find it hard to believe that Deadly Harvest is almost 500 pages long.

As with any good series, Sears and Trollip know that the books are only as good as the recurring characters-- and what a marvelous cast they've created! We see Kubu with criminals and other police officers, and we get to see what a happy, solid relationship he has with his wife, his daughter, and his parents. As his parents age, problems begin to arise, and I feel certain that we'll be able to read more about this in future books. Kubu's superior officer is a good man, which makes a nice change from all the other fictional police detectives who seem to have to deal with pencil-pushing idiots who only protect and serve their own careers. I was a bit doubtful about the addition of Samantha Khama to this wonderful cast. At first she's so intense and fanatical that I wanted to tell her to loosen up, but I knew she'd either treat me to some sort of diatribe, or glare at me and stomp off in the opposite direction. But the longer she investigated, and the more she worked with her fellow officers, my attitude changed. I'm really looking forward to reading more about her.

Actually I'm looking forward to much more than reading more about Samantha Khama. I'm hooked on Botswana, a large, wily detective known as Kubu ("hippo"), his family and friends, and the mesmerizing stories written by two men known as Michael Stanley. May there be many more investigations to come!