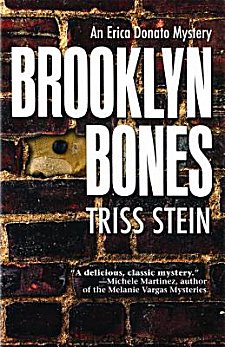 First Line: It began with a sobbing phone call from my daughter, the kind of call every parent dreads.

Erica Donato's teenage daughter, Chris, has been helping the contractor with the renovations on their old Brooklyn brownstone. She calls her mother in hysteria because she just found a skeleton when tearing down an old wall. The skeleton is of a young girl, and from the looks of the other items with her, she's been holding her teddy bear since sometime in the 1970s.

The police seem to think that Erica and Chris should have no interest in this long-dead girl, but Chris becomes increasingly focused on learning her identity. When the house is broken into, Erica-- a young widow and over-age history Ph.D candidate who's an intern in a local history museum-- sends her daughter off to art camp to get her out of harm's way. But it becomes crystal clear that, as much as Chris wants the young girl identified, someone else is willing to kill to keep the dead girl a Jane Doe.

This book has a fascinating setting, letting us get to know both present-day Brooklyn as well as some of its colorful history, and I also enjoyed reading about the work Erica does for the local museum. The cast of characters is colorful, especially the grumpy old reporter who reluctantly decides to help Erica in her search for information about the girl. Erica's daughter Chris is a typical teenager awash in hormones. From one paragraph to the next, you never know when it's time to hug her to bits... or to pretend that she's temporarily insane.

For all its strengths, however, I had two problems with Brooklyn Bones. One concerns the mystery itself. I had a difficult time believing that the bad guys would go to such extremes to cover up an old crime when the police didn't seem to be all that interested in solving it.

The second problem I had is with the main character herself. Although her behavior is often summed up as "the Brooklyn coming out in her," it usually felt more like a flaky sort of bravado-- over the top, often ill-advised, and sometimes inappropriate. Since I don't know anyone from Brooklyn, this behavior of Erica's may be right on the money, but I do have my doubts. However, I did want to shake her until her teeth rattled over one thing in particular. Her house had been broken into, someone close to her had been murdered, and a family friend had insisted that Chris be sent to art camp to get her out of harm's way. So what does she do when Chris wants to come home for a few days in the middle of all this? Erica lets her come back! The "female in jeopardy" scenario (often referred to as "fem jep") where a female stupidly puts her life in danger (or in this case, her daughter's life) is one that I do not like, and I liked it even less in this book since it involved a mother dealing with her child's safety.

All that being said, I did find a lot to like about this book, and I'm curious to read the next book in the series. Hopefully Erica will part ways with the dreaded fem jep!