The Messenger by Stephen Miller 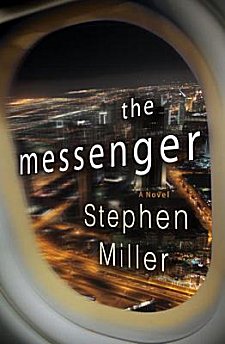 First Line: If they were to make a feature film of her life, the script would always be trying to map the source of her flawed personality.

Daria, a survivor from a refugee camp, has lost everything and witnessed things that you and I could only imagine in our worst nightmares. She is a believer. Committing herself to a deadly mission, she is sent to another country where she learns languages and learns how to blend in. When her training is over, she's given a ticket to New York City where she poses as a journalist for an Italian fluff magazine. Daria is an arrow who's determined to strike as many targets as she possibly can.

The only person in the United States who truly seems to understand what Daria represents is Dr. Sam Watterman. After being falsely accused and disgraced in the anthrax inquiries after 9/11, Watterman has been taking care of his dying wife. Now the government that vilified him demands his expertise in locating a threat that has put millions in danger.

These two people's lives are destined to intersect. Their faith will be tested, and each one of them will question what it is to have something worth dying for.

Stephen Miller does something that most people might think impossible: create a character who is a committed terrorist and not only give that character a face, a mind, and a heart but make her-- if not totally sympathetic-- at least understandable and worthy of compassion. Daria has been turned into a "Typhoid Mary," and her travels across the country serve a dual purpose. One, since the reader knows that she carries a deadly contagion, this ratchets up the tension, and as she carries out her instructions, don't be surprised if you change your habits on board airplanes, in restaurants, restrooms... any sort of high traffic public areas. Secondly, these travels bring her in contact with many people, and we are able to see how she reacts to them and how her behavior begins to change.

Daria is such a strong character that Dr. Sam Watterman is almost completely overshadowed by her. Yes, the book does need someone to steer government officials in the right direction and to have them search in the right places and handle the situation in as safe a manner as possible, but Daria is magnetic. I felt the book might've been even better if Daria's hunter had been more "generic". Then Daria's evolving character could have been explored even more deeply. What I would really enjoy seeing is a future book that gives Dr. Sam Watterman a chance to have center stage all to himself. He deserves it.

This is the type of thriller that I enjoy the most: fast-paced, with an all-too-believable plot, and strong, memorable characters. Something tells me I'll be reading more of Stephen Miller's books.