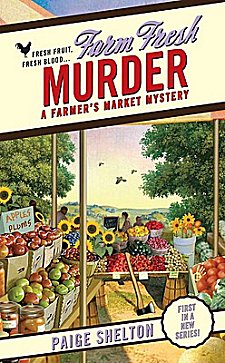 First Line:"What?" I yelled into my cell phone.

When Becca Robins' aunt and uncle were killed in a car accident, her twin sister Allison inherited enough money to pay off her college loans and save some for her children's educations, and Becca inherited the couple's farm. Allison manages Bailey's Farmers' Market in rural South Carolina, and the morning she calls her sister in a panic, Becca has to stop working on her latest batch of jam to head straight over there.

Becca is well acquainted with Bailey's since she makes a living selling her jams and preserves there. When she arrives, she discovers that one of the new vendors, Matt Simonsen, has been murdered. The prime suspect? "Old, bald, and cranky" Abner Justen, seller of extraordinary wildflowers and the man who treats Becca like a daughter. Things are looking bad for Abner-- who's disappeared-- and Becca is determined to call a halt to her jam making until she's found the clues that will lead to the real killer.

This first book in the Farmers' Market series introduces us to homegrown and handmade treasures, a murder that involves unlocking many past secrets, and a cast of very interesting characters. If you're the type of reader who doesn't care for southern vernacular speech, you're not going to find it here. One of the few things that I didn't particularly care for was the fact that the book didn't really feel as though it was set in South Carolina, and I don't mean to infer that a writer needs to have all the characters spouting "y'all" in every sentence. The rural and small town atmosphere, however, is done very well. The mystery is also a good one. I unraveled several clues, did my own deduction, but I still hadn't figured it all out.

As with most cozy mysteries, it was the cast of characters that drew most of my attention. Becca is the most interesting, not just because she is the main character, but because she's flawed. She tends to be very focused and self-centered, and as a result, she's really only socialized with her co-workers at the farmers' market itself. She doesn't know where most of her friends live, and she's only ever invited them to her own home if she's needed help with her work. I liked watching her learn a few uncomfortable truths about herself during the course of her investigation, and I look forward to seeing if she's really learned her lesson. I also liked the character of cranky old Abner as well as another stall owner named Jeanine, who "didn't make a habit of being friendly, but she wasn't rude." Naturally Becca was the character in the spotlight throughout Farm Fresh Murder, and I'm looking forward to seeing the other characters Shelton created being developed more fully in subsequent books.

The farmers' market is a winning setting. Combine that with a keen eye for a mystery and a cast of characters you want to get to know better, and I know I'll be wandering through Bailey's Farmers' Market again in the future.