My First Murder by Leena Lehtolainen 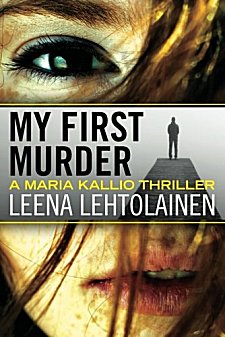 First Line: Riki woke up to a vicious call of nature.

It was supposed to be a fun weekend for the choir group at Tommi Peltonen's seaside Helsinki villa. Instead Tommi is found floating facedown in the water off the dock, a victim of what is soon determined to be murder. It is up to rookie detective Maria Kallio to focus on the choir members in an attempt to solve her very first murder case. It doesn't take long for her to realize that what on the surface appears to be a happy and close-knit group is really a collection of young people filled with bitterness, passion and jealousy. It will take a lot of digging for her to find the killer.

As much as I wanted to like this book, I simply could not. Too many things just did not add up. First, a rookie cop is put in charge of the murder investigation into the death of the son of a high-profile family. Yes, all her superiors are on some sort of leave or vacation, but why should that let the police put someone in charge who isn't even sure she wants to be a detective? One of Kallio's supervisors is a well-known drunk who often takes personal days to sleep off his latest bender. The other has taken vacation simply because he's sick and tired of doing all the drunk's work. This does not inspire much faith in East Helsinki's police force.

The pace of the book also drags quite a bit. There are several digressions while Kallio and the others are pulled away from the murder investigation to take care of other crimes. Although I know this happens in real life, these interruptions really impede the flow of the narrative-- to the point where I almost started shaking the book and telling the author to get a move on.

Maria Kallio talks a lot in the book. Too much of it is about her indecision over whether or not she should commit to a career in law enforcement. (Many times it sounds as though she thinks law enforcement is beneath her.) Once again I nearly began speaking to the book to tell Maria that, if she's so undecided, maybe she should resign and let someone else take over the investigation. I never really got any glimpses into her thought processes or how she was trying to solve the murder. By book's end it appeared that she just talked to all the choir members until she fell into the solution. Maria was a character who did not hold my interest-- and neither did any of the others.

All in all, I was very disappointed in this book. Even the Finnish setting was rather generic. Since it's the first book in a long-running series, I have to think that the books that follow show a great deal of improvement. However... I don't think I want to test this theory.