A Spirited Gift by Joyce and Jim Lavene 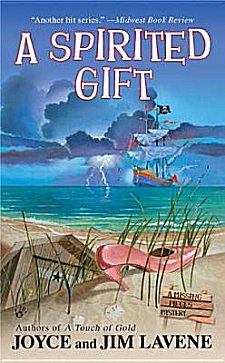 Dae O'Donnell has good reason to be nervous. As mayor of Duck, North Carolina, she got the bright idea of inviting twenty small town mayors as well as their spouses and assistants to the Blue Whale Inn for her first Mayors' Conference Weekend. Unfortunately a storm got its own bright idea of becoming a hurricane and heading right for Duck, contrary to what every weather forecast predicted. With the power out and trees crashing through windows, there's little time for Dae to keep track of so many people.

The next morning the body of one of the mayors is found in what's left of the inn's toolshed. Although police believe the woman's death was caused by the storm, Dae knows it's not because she found Sandi's ring in the ballroom the night before, and the vision she had showed Sandi being held at gunpoint.

I have really enjoyed the Missing Pieces series up to this point. I love the setting on North Carolina's Outer Banks (incidentally, the town of Duck is a real place), and Dae's ability to touch an object and be able to see parts of its history fascinates me. Dae is a likable and sympathetic character as is her romantic interest, former FBI agent Kevin Brickman. However, from a promising beginning, the series began to sag into complacency a bit. Dae and Kevin's relationship has remained static, and Dae seldom uses her gift to any degree-- especially in solving crimes. Mostly she seems to put on her big mayor's smile and take care of Duck's business, and although I like the place, I don't read these books to find out how to run a small town on the Outer Banks.

The mystery in A Spirited Gift never became anything but lukewarm to me for two reasons. One, the victim didn't generate much interest. She wasn't a particularly admirable person, but I couldn't even work up a good dislike towards her. The second reason the story never really took off for me is the fact that I spotted the killer the very first time the character was described. Many times this does not sound a book's death knell for me, but when I couldn't get interested in other parts of the book, it was tough going here and there.

Fortunately I did read the entire book because at the very end, the authors made it abundantly clear that major changes are in the works for Dae O'Donnell. The timing is fortuitous, and I look forward to seeing what happens in the next book in this series. No, I'm not ready to give up on Dae-- I like her that much!