The Wrong Hill to Die On by Donis Casey 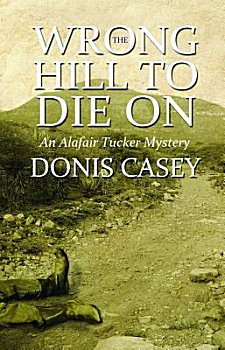 First Line: He was as handsome a man as Alafair Tucker had ever seen.

It's March 1916, and Alafair Tucker is exhausted. Winter in much of the West has been the wettest on record, with bridges, roads, and railroad tracks being washed out. This weather means that Alafair has been nursing one sick child after another-- and with ten children, that's a lot of nursing. Only one child hasn't recovered: ten-year-old Blanche whose lungs are so bad that the family doctor tells Shaw and Alafair to take her someplace warm and dry if she's to have any chance of getting well.

Fortunately Alafair's youngest sister Elizabeth lives in Tempe, Arizona, so Shaw, Alafair and Blanche endure an arduous ten-day train ride to the dry sunny skies and balmy temperatures of the Sonoran Desert. When they arrive, they discover that they narrowly missed Pancho Villa's raid on Columbus, New Mexico, but they really don't have time to digest that news because Elizabeth wants to show them off to all her acquaintances. In no time flat, she organizes an open house and even hires a mariachi band to play throughout the evening.

The next morning Alafair goes outside to bask in the sunshine and marvel at the scent of orange blossoms in the air but instead finds the body of one of the mariachi players in an irrigation ditch. Emotions are high in Arizona because, due to the political unrest in Mexico, many people are fleeing that country and escaping to Arizona. A U.S. Marshal comes to question everyone and to search the area because rumors are flying that the dead man was a spy for Pancho Villa. As members of Alafair's family come under suspicion it's not long before she begins a little investigating of her own.

This book has much to say about several topics, and Casey tells her tale in such a gentle, thoughtful way that not one whiff of heavy-handedness or sermonizing is to be found. All the books in this series are very personal-- the world as seen through the eyes of an Oklahoma farm woman in the 1910s, a woman who really isn't affected by a war in Europe, the politicking in Washington, D.C., or the latest Paris fashions.

The things that affect this woman almost always have something to do with her family. Thus Alafair experiences racism and anti-immigration issues in Arizona through her sister and her sister's family by witnessing how they've formed friendships with Hispanic people in town. She ponders family unity and strength through observing the troubles her sister Elizabeth is having. There's also a lot to be learned about the bond between mothers and their children by comparing Alafair's relationship with Blanche to the relationship between Elizabeth and her young son, Chase. Even the elements that go into the making of a strong marriage flow into the natural progression of this story.

Yes, there is a lot in this book, and I enjoyed every bit of it. I enjoyed experiencing life in Arizona shortly after it became a state and traveling down unpaved roads that bear absolutely no resemblance to the streets they are today. The inclusion of Hobart Bosworth and his crew who were filming a movie called "The Yaqui" on the streets of Tempe was a very special treat.

I also enjoyed the mystery because Casey very skillfully led me astray a time or two along the way. Of all the things there are to like in The Wrong Hill to Die On, I think the one I appreciate most is the fact that, within each book, we're given the opportunity to get to know one of Alafair's ten children. Each one of these children has a different personality, and that is reflected in the relationship between child and mother. More than once Blanche made me smile because this little girl was relishing the opportunity of being an only child... if only for a little while.

The author is also adept at bringing in bittersweet moments and feelings of dread when the date for America's entry into World War I draws ever closer, or when Shaw begins planning the things he and Alafair can do when the children are all grown. I've become quite attached to all the Tuckers, and I care about what may happen to any one of them in the future.

If you enjoy historical mysteries that have strong characters and that really give you a feel for life in America during the 1910s, I cannot recommend this series highly enough. Even though this book can stand well on its own, you really shouldn't miss any part of the life and investigations of Alafair Tucker.

Historical Mystery, #6 Alafair Tucker mystery
Rating: A
Source: NetGalley and purchased from The Poisoned Pen
by Cathy at Tuesday, November 06, 2012