The English Monster by Lloyd Shepherd 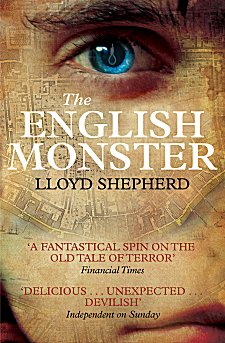 First Line: The ancient road began at the Tower and ran east to west along a terrace of gravel.

It's 1811, and from the ancient Ratcliffe Highway to the London Dock, the district of Wapping is the throbbing heart of the British Empire's meteoric rise in trade and the accumulation of wealth. Wapping is also the scene of the gruesome murders of two families, and John Harriott, creator of the newly established Thames River Police soon realizes two important facts.

The first fact is that petty jurisdictional squabbles are getting them nowhere. The second fact is that, after close observation of his waterman-constable, Charles Horton, Harriott believes that the old methods of policing aren't going to find the killers either; it's Horton's style of "detection" that Harriott believes will bring the murderers to justice.

The English Monster isn't just a story about the hunt for the killers of two families; however, there's another story told in alternating chapters that is intertwined with the investigation throughout. It is the story of William Ablass, a young Oxfordshire man who goes to Plymouth in 1564 to board a ship and make his fortune so he can come home and buy a farm for his beloved young wife and himself. He becomes a member of Jack Hawkins' crew, sanctioned by the Queen to raid Spanish shipping. "Long Billy" (as he's often called) changes in ways he never would have foreseen.

Shepherd's tale of the quest for trade and fortune is well-told, atmospheric, and often quite chilling. The growth of Wapping and the entire area of the Docklands in London sets a perfect stage for Long Billy, John Harriott and Charles Horton-- a man with his own secrets that come back to haunt him:

Death and beer always hang heavy in the air in Wapping.... And hulking over the whole area, visible through gaps in the buildings like a canvas on which Wapping has been painted, the walls of the new dock and its surrounding warehouses.... But even Harriott must admit that there is something massively dark about the dock, something of the gaol about its walls and the warehouses between it and the river, buildings which now glower over the High Street , each of them a good storey or more higher than the older buildings which cluster around the walls like supplicants at a cathedral.


Under the observant eye of Shepherd, Wapping and its docks become just as important a character as Long Billy, Harriott, Horton, and the other people who live there.

As much as I wanted Harriott and Horton to find the killers, I have to admit that the story of William Ablass was the one I found to be engrossing... and creepy. There are things about Long Billy that I'd love to share with you all, but that would ruin the book for you. Shepherd's tale is Dickensian in its detail and atmosphere, and the only real weakness in his story is that, when he shifts the focus to the 1811 investigation of the murders in the book's later stages, I missed the gaps in William Ablass's story. In many ways, Long Billy reminded me of a great white shark, and it didn't feel natural for me to turn my back on him.

Yes, William Ablass is the the English monster of the title, but as I read, I learned that there is more than one monster in this tale, and that is what money and greed have done to us all throughout the centuries. I still feel uneasy after reading The English Monster. It is a book that stays with the reader long after the last page is read. I've since learned that Shepherd has another book, The Poisoned Island, due out next year. I definitely want to read it!

[Note: The cover, quote, and information about The English Monster refer to the UK edition of this book. It is also available in an US edition.]