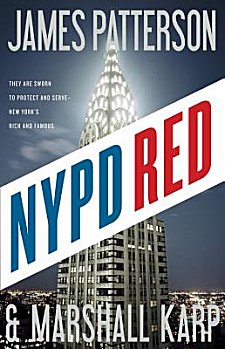 Beginning this book with directions from a screenplay is quite fitting: New York City is geared up for Hollywood on the Hudson Week, a time to lure as many Hollywood directors and producers as possible to spend all their money on filming in the Big Apple. This is a week when the city's special task force, NYPD Red, is on full alert. (The actual name of the task force is the High-Profile Victims Response Team, but the mayor knows that moniker-- strongly reminiscent of "the 47 Percent" remarks-- would be politically damaging.)

NYPD Red Detective Zach Jordan is first on the scene when a world-renowned producer drops  dead at his power breakfast. He's accompanied by his new partner, Detective Kylie MacDonald, who just happens to be his ex-girlfriend. They've barely begun their investigation when more Hollywood figures begin to bite the dust in ever more bizarre and public ways. Somehow Zach and Kylie are going to have to get ahead of a psychopath who's scripted his reign of terror down to the last detail. If they don't, it's going to mean a high body count and a city on the verge of chaos.

I'm probably one of the last people on the planet who's never read a James Patterson novel. To be quite honest I wasn't even tempted until one of my favorite writers, Marshall Karp, teamed up with him for this book. Patterson himself has said of Karp's Lomax and Biggs series: "Marshall Karp is the only writer I know who can get big laughs out of murdering someone," and I can definitely see Karp's wonderful sense of humor throughout NYPD Red.

If you're the type of reader who prefers deep, philosophical novels, I don't think you're going to want to pick up this one. However, if you're a reader who thoroughly enjoys a high octane thriller with lots of chases, explosions, a villain who's a master of disguise, and good-looking heroes who always have snappy dialogue at their command, this is most definitely the book for you. No, it doesn't break any new ground, but these two writers know how to work magic with a standard plot.

How do they do it? By that dialogue I've already mentioned, and by setting such a rapid pace that it's difficult to catch your breath. They also do it by creating memorable characters, and I'm not just talking about über competitors Zach and Kylie. Even characters with bit parts like desk sergeant Bob McGrath, the "black Quentin Tarantino" and Captain Delia Cates shine brightly. Karp and Patterson both know that you can have the best plot in the world, but if it's not peopled with interesting characters then that wonderful plot's just a waste of time.

If, like me, there are times when you want to pick up a book and just have fun, let me recommend NYPD Red.