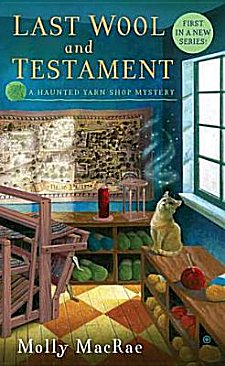 First Line: It wasn't how I'd planned to spend my thirty-ninth birthday, driving like a crazed woman from Richmond, Virginia, to a cemetery in the mountains of east Tennessee.

Kath Rutledge, textile preservationist for the state of Illinois, is driving like a crazed woman because she's trying not to miss the funeral of her beloved grandmother, Ivy McClellan. She almost doesn't make it, thanks to Cole Dunbar, who unfortunately is the type of police officer anyone would dearly love to punch in the nose.

After the funeral, Kath goes to her grandmother's popular fiber and fabric shop, the Weaver's Cat, where many of Ivy's friends have gathered to honor her memory. Most of those attending belong to a group of fiber and needlework artists known as TGIF (Thank Goodness It's Fiber). Afterwards Kath goes to her grandmother's cottage, fully expecting to stay there while she wraps up Ivy's affairs. However, the locks have been changed. It seems that Ivy didn't own her home, and the new owner has it locked up tighter than a drum until he gets the rent he's owed. Or so he says.

An acquaintance gives Kath an alternate place to stay, and it's not until the next day that she learns that the previous tenant, Emmett Cobb, was murdered-- and Kath's grandmother is the prime suspect. Even though this cake doesn't need any icing, Kath gets it anyway: the cabin where she's staying has another occupant-- a gloomy ghost who is just as motivated as Kath when it comes to finding Emmett Cobb's killer.

Life in a small town in east Tennessee is lovingly described in Last Wool and Testament, as are its residents. MacRae has the perfect setting and a wonderful cast for her new series, and if you aren't exactly a fan of paranormal mysteries, feel free to give this one a try anyway. The paranormal angle is done with a very light touch, and the ghost is more of a monumental pain in the neck than she is otherworldly.

I enjoyed myself becoming acquainted with the cast of characters (well... with the exception of Cole Dunbar; I really did want to punch that guy in the nose),  and my candidate for whodunit changed from time to time until close to the end when one character's behavior set off my inner alarm system.

I savored all the information about textiles throughout the book, and although I normally ignore patterns or recipes in the backs of cozy mysteries, I have to admit that-- although the knitting pattern for a baby/toddler's hat didn't do much for me, the recipe for  Rosemary Watermelon Lemonade made my taste buds sit up and beg.

Good setting, good characters, good food... and fiber and fabric, too. Last Wool and Testament is a wonderful beginning to a new series.