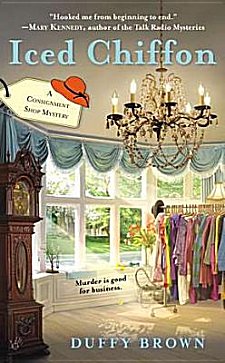 First Line: I poured out the last of the pinot and lifted my glass as I gazed around the dining-room table.

Reagan Summerside should never have signed that pre-nuptial  agreement. With the help of a slick lawyer, her ex-husband has taken off with everything that wasn't nailed down, leaving her with lots of bills to pay in an old house she's restoring in the Victorian district of Savannah, Georgia. In order to pay one or two of those bills, Reagan's reduced to selling her designer clothes, which starts her well on the way to opening her very own consignment shop on the first floor of her home.

The Lexus wasn't the only thing her ex took with him: Janelle, the blonde cupcake, went with Hollis straight to his condo. But when Janelle's body is found in the truck of the aforementioned car, Reagan's forced to work overtime on finding the killer. If she doesn't do everything she can to reduce Hollis's lawyer fees, Hollis will sell Cherry House right out from under her to pay that handsome shyster, Walker Boone.

Reagan's got just the sort of contacts to help her, too. Her Aunt KiKi (a former roadie for Cher) lives next-door. KiKi spends a lot of her time giving dance lessons to all sorts of people, so she's right in the thick of all the best gossip. Just in case KiKi misses a morsel or three, Reagan can also rely on AnnieFritz and Elsie Abbott, two retired schoolteachers who hire themselves out on the Q.T. as professional mourners. If that weren't enough, UPS delivery person Chantilly Parker not only helps Reagan with her consignment business by tweeting about it, she also picks up useful information on her rounds in that big brown truck.

If you can't tell by now, I really enjoyed the cast of characters in this book. And although the y'alls are few and far between in Iced Chiffon (which will please some readers I know), Duffy Brown made me smile more than once by her occasional use of Southern colloquialisms. One all by its lonesome is still making me grin because it's one I grew up hearing, and I use it to this day. ("How are you?" "Fine as frog hair!" -- guaranteed to glue a puzzled look on the face of anyone who's not familiar with it.)

I'm undoubtedly dating myself, but the sparks flying between Reagan and the lawyer, Walker Boone, made me think of Maddie and David in "Moonlighting." (Catch some scenes on YouTube or watch it on Netflix.) But even though there is chemistry there, romance never takes center stage over the characters or the mystery. In fact, I was having so much fun keeping tabs on the main characters that I almost forgot to be on the lookout for the killer.

Setting, mystery, characters... and just enough information about running a consignment shop to pique my interest. I'm looking forward to seeing what's in store next for Reagan and all her friends down in Savannah.