Death at the Château Bremont by M.L. Longworth 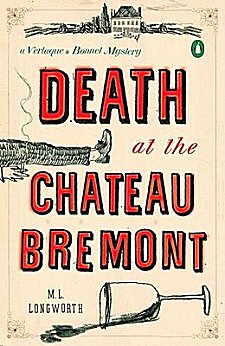 First Line: The attic light was burnt out.

Antoine Verlaque, chief magistrate of Aix-en-Provence, France, is called upon to check into the death of a local nobleman, who fell to his death from an attic window in his château. Although it looks like a simple case of accidental death, Verlaque suspects foul play and asks Marine Bonnet, professor of law at the local university, to help him with his investigation since she grew up with the dead man and his brother.

They've barely begun their investigation, however, when the nobleman's brother also dies at the château. This second death is most definitely murder, and the magistrate and the professor must work fast before anyone else can come to harm. What makes the investigation a bit uncomfortable for them both is the fact that-- until six months ago-- Verlaque and Bonnet had been lovers.

Author M.L. Longworth moved to Aix-en-Provence in 1997 and began writing articles about the region. After a few years the restrictions of writing non-fiction began to chafe, and she turned to crime fiction. According to her website, her primary aim is to have the reader "experience Aix-en-Provence the way I do, as if they were beside me." Longworth accomplishes that quite well in this book. The countryside, the city of Aix itself, the people and their customs are all extremely well-drawn, and I did feel as though I were there.

Unfortunately the author concentrates so much on the land, people and customs that the mystery often appears to take a backseat. The investigation takes a long time to unfold then rushes to its conclusion in the last quarter of the book. It's a shame because the deaths of the two brothers are intriguing, and I would've appreciated a bit more detail before the race to the end.

Verlaque and Bonnet are an interesting pair. Marine is the likable one of the two. I enjoyed seeing how her mind works, and even a small habit like saying "Merci, les garçons" each time she passes the war memorial let me know what type of person she is. Verlaque is an entirely different story. Raised by parents who would've loved to buy themselves a title, he's close to neither and only feels real love and affection for his recently deceased English grandmother. Verlaque is handsome, educated, well-traveled, and finds it very easy to seduce women. He's also a terrible snob. Yes, Verlaque is very easy to dislike, but there is a real attraction, even love, between the magistrate and Marine.

I enjoyed Death at the Château Bremont for its depiction of life in Aix-en-Provence, and for its mystery. Although I don't care for Antoine Verlaque, a few clues toward the end of the book led me to believe that he may realize that he needs to change a few things about himself to make him worthy of someone like Marine. The second book in the series, Murder in the Rue Dumas, is now available. I may find myself in the south of France again to see what happens next in the relationship of this very interesting pair.