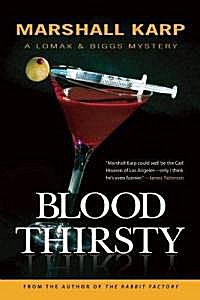 First Line: Roger and Aggie held hands as they watched the kid bleed out.

Detectives Mike Lomax and Terry Biggs are still basking in the glow of solving the murders which occurred in The Rabbit Factory. In fact they've been approached by someone who wants to turn the investigation into a movie. Since Terry has three daughters who want to go to college, they agree to meet with a big-time producer at a red carpet event. Mogul Barry Gerber is a no-show that night, but he does show up in a garbage can the next day. So instead of talking Barry into financing a movie, Lomax and Biggs get to find his killer.

Two days later the prime suspect in Gerber's death is also found dead-- by exactly the same means. Since both of the deceased were widely despised within the Hollywood community the suspect list is huge. Lomax and Biggs need to find the motive in order to find the killer.

I fell in love with Marshall Karp's writing and with his sense of humor from the moment I began reading The Rabbit Factory, and my love affair has only deepened with Bloodthirsty. I've always been a fan of humorous mysteries and had been wild about Janet Evanovich's Stephanie Plum books. But after reading the same plot with the same characters that never grew or changed, I stopped reading Evanovich quite a while ago. Thank heavens I discovered Marshall Karp's Lomax and Biggs! My warped sense of humor is finally off its starvation diet.

Karp has plenty from which to draw his humor: the police, the fire department, the morgue, the hospital, and-- last but not least-- Hollywood. Since I come from a long line of farmers and sailors, and I worked with the public for well over a quarter of a century, I have to say that Karp had my funny bone lit up like a pinball machine throughout the book.

What's marvelous is that Bloodthirsty isn't just funny. The characters are well drawn. Mike Lomax still grieves over the death of his wife, but he stopped wallowing and is making changes. Terry Biggs' life in a house filled with females is a riot (and I feel a bit of pity for him, too). Even minor characters have a depth to them that you normally only see with characters "above the title."

The pacing of the plot was swift and sure. As I read, I'd occasionally come up for air and be amazed at how much I'd read in a short period of time. Karp can really suck you into his story. And just when I thought I knew where the plot was headed, it did a 180, gave me a surprise or two, and left me in delight.

If your sense of humor needs a good meal, set it down to a selection of books written by Marshall Karp. You'll know how grateful it is by how hard you laugh.

Police Procedural, Humorous Mystery, #2 in the  Lomax and Biggs series
Rating: A
Source: Paperback Swap
by Cathy at Thursday, November 29, 2012