The Vanishing Point by Val McDermid 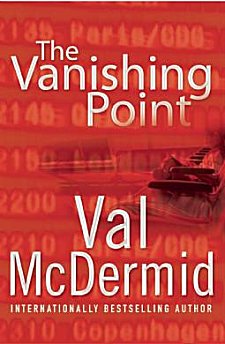 First Line: Stephanie Harker was just about old enough to remember when air travel had been exciting.

Stephanie Harker has carefully planned this much-needed vacation in the United States with her son, Jimmy. Knowing that the metal plates and screws in her leg will set off the detectors at Chicago's O'Hare Airport, she's made sure that Jimmy knows what he's supposed to do while Stephanie steps inside the glass inspection box for a pat-down. Everything goes as anticipated until-- to her horror-- a man in a TSA uniform walks up to Jimmy, speaks to him, takes him by the hand, and walks away with him. Dashing out of the inspection area, Stephanie is jumped on by TSA agents who are more concerned with her as a suspected terrorist than they are by what she's trying to tell them: "My son has been kidnapped!"

When she finally pierces the fog of their determined deafness, FBI Agent Vivian McKuras is put in charge of the case. Once Vivian begins to question Stephanie, the agent learns that this isn't a simple case at all. The kidnapped boy is the son of Scarlett Higgins, a popular reality TV star in the UK who recently died of cancer. Per Scarlett's will, Stephanie is Jimmy's guardian. Since the boy's father has also recently died, the boy's life has been a roller coaster, and Stephanie is frantic with worry. When will she receive instructions for the ransom? All she can think of is getting Jimmy back safe.

With an Amber Alert immediately put into effect, the only thing McKuras can do is question Stephanie. The more they learn, the more chance they have of narrowing down the list of suspects and finding the boy. Stephanie was originally Scarlett's ghost writer. The more she grew to know Scarlett, the more she liked the celebrity until they became fast friends.  As Stephanie's story unfolds, Vivian McKuras gleans the facts that she believes will bring a little boy home to the woman who loves him.

Val McDermid has been one of my favorite writers for several years, and with the kidnap taking place right at the beginning of the book, she had me hooked quickly. The Vanishing Point has many things to share with its readers: the ins and outs of being a ghost writer, the life of a reality TV celebrity, even some UK slang (and there's a handy little glossary at the back of the book for any who aren't familiar with it). But-- as usual with any book written by McDermid-- what is vitally important is the relationships between the characters.

As a ghost writer, Stephanie has to get to know her subjects very well without falling under their spells, so she has to tread a very fine line. She has a boyfriend, but she prefers to live alone. She doesn't have pets. She doesn't really have any close friends. This is a woman who's taken her career to an unhealthy extreme.

Enter Scarlett Higgins, the reality TV star dubbed by the UK press as "Scarlett Harlot." This young woman had an incredibly harsh upbringing. She believes that becoming a celebrity is her one claim to fame, and she works hard at staying in the public's eye and in the headlines of the tabloids. As these two very different women come to know each other, Stephanie's Rules of Ghost Writing fall by the wayside, and they become best friends.

McDermid is a master at the unfolding of this type of story. She has the skill and the confidence to tell the story and let the reader come to his or her own conclusions-- and I did. The ending is supposed to be an "I didn't see that coming" shocker. It wasn't for me, and this is where this review gets tricky because I can't say too much about my reaction to the ending without giving it away. I'll give it a shot anyway.

Normally when I read a book, I find that I'm most comfortable when there is at least one character whose viewpoint I trust. In The Vanishing Point, I trusted no one's. Stephanie has led a rather sheltered life in which she's spent most of her time keeping everyone at a distance. This has helped her to choose a very possessive boyfriend to whom she's reluctant to give marching orders. Can I trust this woman's judgment? Not really.

And Scarlett? More than once Scarlett admits that she knew reality TV was her one and only shot out of an unbearable life. Now that she's got what she wants, she's determined to keep it. Am I going to trust the word of a woman whose sole aim is looking out for herself? No.

Since I trusted none of the characters as I read the book, I found that I could enjoy the story a great deal-- but not be surprised by the ending. For me, The Vanishing Point is a thriller that doesn't thrill, but it certainly does satisfy my every craving for an engrossing character study of two very different women. Is this one of McDermid's best books? No, but it's miles better than many other books you can put your hands on today.