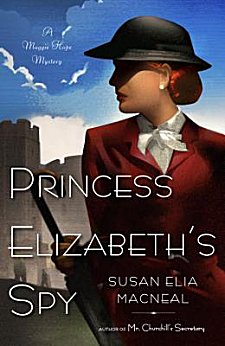 Some books make you smile as you read them. Some books refuse to let you stop reading them until you've reluctantly turned the last page. I'm still glowing from just such an experience. I sat outside on a lovely day and refused to move until I'd completely devoured Susan Elia MacNeal's Princess Elizabeth's Spy.

This second book in the Maggie Hope historical mystery series is set in England during World War II. The Nazis have set a plot in motion against King George VI and his family, and Maggie Hope finds herself undercover in Windsor Castle to protect the fourteen-year-old Princess Elizabeth. (My advice to you all? Pre-order a copy of this book!)

At the very beginning of the book, I noticed its dedication to Judith Merkle Riley, the writer of wonderful historical novels that it's been my pleasure to read:

Thanks to Susan Elia MacNeal, I have the backstory to that dedication, and-- with Susan's permission-- I'm now sharing it with you. It's the type of information that makes a wonderful book even more special.

I first worked with Judith on her book The Oracle Glass, which was published by Viking Penguin in 1992. She was absolutely delightful, and I thoroughly enjoyed getting to know her. Later, she introduced me to her daughter, Elizabeth Riley, who’s just a few years younger than I. Elizabeth and I became fast friends, and she ended up working in publishing in New York City, too. Years later, she was a bridesmaid at my wedding, and I was a bridesmaid at hers. Our kids are the same age and often play together.

Over eighteen years, I stayed friends with Judith. I remember how patiently she listened to me cry over the many breakups of my 20s, and how she taught me how to apply black liquid eyeliner. She was kind enough to read some really, really early drafts of Mr. Churchill's Secretary. They were horrible, but she was wonderfully patient, giving me gentle words of advice and constructive criticism.

Judith was not only a novelist, but was also an academic. Her father, Theodore Charles Merkle ran Project Pluto, and her brother Ralph C. Merkle is a pioneer in public key cryptography, and more recently a researcher and speaker on molecular nanotechnology and cryonics. She held a Ph.D. from the University of California at Berkeley. She taught in the Department of Government at Claremont McKenna College in Claremont, California. And she was the mother of two children and two grandchildren.

As she read over many of my drafts of Mr. Churchill's Secretary, she would often say things like, "You're not making it sexist enough!" A lot of the lines Richard Snodgrass has are things Judith remembered male supervisors saying to her.

Judith's smart, snappy, no-nonsense, no-patience-with-sexist-idiots definitely informed Maggie Hope's outlook on working at No. 10 Downing Street and then with MI-5. Also, Judith's first heroine's name was a medieval woman named Margaret of Ashbury, the heroine of her novel, A Vision of Light – so between Judith's Margaret and the fact that Margaret was a very popular name in the early 1900s, I had my heroine’s name. Judith's Margaret also had red hair (because her daughter and my friend Elizabeth's hair is red), and I decided it would be lucky to continue the tradition.

Judith was an amazing woman, a scholar, an academic, a novelist, a painter, and, of course a mother and grandmother. She could speak Russian, play the piano and dance the tango.

I can truly say that Maggie would be nothing like the character we know today without Judith Merkle Riley.

She died from uterine cancer two years ago, far too young. I still miss her terribly. I think she would have been so truly excited by the publication of Mr. Churchill's Secretary and now Princess Elizabeth's Spy. Sometimes as I write, I can undeniably hear her voice, "Flick at the historical details! Don't bonk your readers over the head with them!"

And, when the inevitable setbacks occur, I can hear her say "Just take your son to the playground and push him on the swings. That's what's really important in life."

Thank you so much for sharing this with us, Susan. I can just picture the big smile Judith would have on her face with the publication of Princess Elizabeth's Spy!