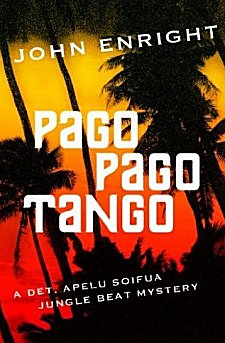 First Line: Once upon a time this had been a road.

Detective Sergeant Apelu Soifua was born on an island in American Samoa, and when he was a child, his father moved the family to the mainland where, as an adult, Apelu joined the San Francisco Police Department. After seven years on the force, he moved his own family back to Samoa to take care of his ailing father. His wife works for a shipping company, Apelu is a detective sergeant on the island police force, and they have four children.

Apelu's background makes him very familiar with the differences between the two cultures that co-exist on the islands. He needs every bit of that knowledge with a case he's determined to solve. He is called to the home of a white family in Pago Pago. They've been burglarized, and after speaking with the wife, Apelu goes to the canning factory to meet with the husband, who gives him a list of the stolen items. At first, it seems like an open-and-shut case, but as the detective starts gathering evidence and piecing together clues, he realizes that it's anything but a clear-cut case of breaking and entering.

As Apelu investigates, it becomes very clear that living on a small island where everyone knows everyone else has its advantages. He has to navigate a twisted track between the Samoan and American cultures, finding mystifying codes, dead bodies, and plenty of lies along the way.

Although the real villain's insertion into the plot was a bit too transparent for me, I really enjoyed this book. It's perfect for any armchair traveling mystery lover. Enright's descriptions of the Samoan landscape-- where the frigate birds are as much a part of the sky as the clouds-- are vivid and poetic. He shares a great deal of information about Samoan culture and the effects that Western civilization has had on the islands. All these insights may seem like so many interesting sidetrips in the narrative, but they aren't; they are vital to understanding how Apelu approaches the investigation.

I was so engrossed in this book that I finished it much too soon. Now I have to wait in hopes of another investigation with the intriguing Detective Sergeant Apelu Soifua. I highly recommend Pago Pago Tango to any crime fiction lovers who like strong stories, intriguing characters, vivid, exotic settings, and learning about other cultures.