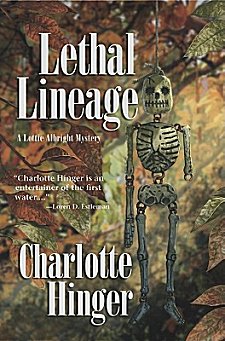 The Episcopalians in Lottie Albright's corner of western Kansas have worked hard to build a small church on a parcel of land that sits on the corners of four counties. The first day they gather together for a sermon, communion, and the confirmation of Lottie's niece.

The bishop gives an inappropriate sermon filled with hellfire and brimstone, and everyone is thunderstruck when beloved Reverend Mary Farnsworth drops the chalice during communion and locks herself in the anteroom. Lottie's sister Josie, a psychologist, stays after the service to comfort Mary, but Lottie orders her sister to leave when the locked door is opened and Mary's body is found on the floor. Frightened  by the bishop's strange rituals for disposing of the spilled wine, Lottie would like nothing better than to leave, but as undersheriff, she must stay to attend to the death.

An elderly lady who attended the service insists that a man kneeling next to her scared Reverend Mary into a heart attack which gives credence to Lottie's belief that this was not a natural death. Calling in other law enforcement agencies, Lottie discovers many more questions than answers as the investigation moves forward.

The first book in this series, Deadly Descent, relied a great deal on Lottie's skill as an historian digging through old records, documents, and genealogical charts. In Lethal Lineage, Lottie finds herself focusing more on the oral histories of several county residents. She also realizes that she's bitten off more than she can chew in her work for the county historical society and as undersheriff. It is something on which both she and her husband must come to some sort of agreement while Lottie tries to find a killer and deal with a sheriff whose family has ridden roughshod over a neighboring county for decades.

Hinger brings sparsely populated western Kansas to life by seamlessly including details of how poor counties constantly battle budget constraints as well as how feuds, secrets and lies never seem to die out no matter how many decades pass. (Have you ever stopped to wonder how many fewer books would be written if people everywhere would simply tell the truth?)

Her three main characters-- Lottie, her sister Josie, and her husband Keith-- are strong, vivid people who care for one another deeply although they don't always see eye-to-eye. I feel as if I've known them my whole life.

In just two books I've fallen in love with the setting, the characters, and the way Charlotte Hinger can tell a story. Lethal Lineage stands alone quite well, but I think it would be best to start at the beginning so you can fully appreciate the fascinating work Charlotte does at the historical society, as well as the dynamics between the characters. This is a highly recommended book in a highly recommended series. I can't wait for book number three!

Cozy, #2 Lottie Albright mystery
Rating: A
Source: Purchased as a Nook Book from Barnes and Noble
by Cathy at Tuesday, October 23, 2012