The Gold of Thrace by Aileen G. Baron 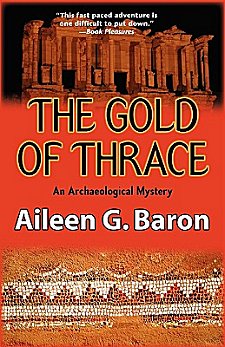 First Line: "I saw it all," the American woman was saying.

Archaeologist Tamar Saticoy has discovered a wonderful Roman mosaic floor in the ruins of a building at her dig in Turkey. In order to be properly studied, it must be very carefully removed and transported offsite. However, the entire floor is stolen overnight. Couple the theft with the murder of a member of the archaeological staff, and Tamar knows something deadly serious is going on, and she wants to get to the bottom of it.

While Orman tries to follow the route of the stolen mosaic, the other director at the dig, Andrew Chatham, has left, traveling to Bulgaria where he finds a hoard of ancient Thracian gold. Tamar finds clues to the mosaic that lead her to Basel, Switzerland and the antiquities dealer, Gilberto Dela Barcolo. Then other members of the team die, and Tamar finds herself deep in a labyrinth of theft and forgery.

Archaeologist Aileen Baron knows how to bring her subject to life. Her settings in Turkey, Bulgaria, and Switzerland, the scenes at the dig, her descriptions of Roman antiquities, and her telling of the legends surrounding the Thracian gold are wonderful. I have a fondness for archaeological mysteries, and Baron's talent at describing the work, the setting, and the rewards are among the very best. The book's foundation is rock solid.

Where the book fell apart a bit for me was in the mystery. Tamar never once impressed me as someone who could go undercover in such a deadly enterprise and come out in one piece. She made rookie mistakes that the bad guys should've noticed immediately. Also, the other three members of the team-- Mustafa, Orman, and Chatham-- scatter in all directions. We seldom know what Mustafa is up to, Orman basically disappears like a wisp of smoke, and Chatham remains as the only other character we get to follow for any distance. These characters and their actions needed to be woven more tightly into the narrative instead of dangling like loose threads.

The mystery is a complicated one. With so much going on, the story needed more than 190 pages to be well told. Just as I thought I was beginning to piece things together, the solutions were presented. Game over.

Although I did have a problem or two with the mystery, there was more than enough in The Gold of Thrace for me to like. I will definitely be looking for more of Baron's books.