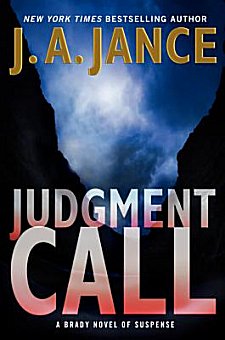 First Line: The car stopped in the middle of a stretch of rough dirt road.

Sheriff Joanna Brady's daughter Jenny decides to go for an early morning ride and stumbles across the body of her high school principal, meaning that Joanna's personal and professional lives are about to meet head on. Not only did the murderer have to pass right by the ranch, the situation gets even stickier when a photo of the dead woman's body gets posted on Facebook. Joanna knows that there's only one person who could've taken that picture: her own daughter.

As the investigation begins, Joanna would dearly love to avoid her mother, who's one of the people in charge of Bisbee's big art show and auction, but it's not meant to be. Joanna has to juggle her demanding mother along with the touchy situation with her daughter, a murder investigation, budget cuts, new employees, and a coroner who thinks he's God's gift. Only her writer husband and energetic toddler aren't adding to her to-do list.

As Joanna deals with that to-do list, the investigation seems to point to a group of teenagers who have a grudge against the deceased high school principal, but the more the sheriff digs, the more she learns that the educator had lived a very secretive life. Joanna knows that the woman's buried past undoubtedly holds the key to identifying her killer.

I make no secret of the fact that J.A. Jance's Sheriff Joanna Brady series is one of my all-time favorites, and Judgment Call is one of the very best in the series. It's not necessary to read these books in order for them to make sense, but when you do-- as I have-- you can't help but appreciate and admire Jance's skill at putting together a wonderful cast of characters in the perfect setting.

Yes, the story is a strong one that blends good old-fashioned detective work with the ever-pervasive internet. I knew who the killer was, in a manner of speaking, but I swung and missed at a fast ball of a clue that the author threw right down the middle of the plate and could only exclaim at my blindness when the all-important identity was revealed. But story isn't the only good thing about a Sheriff Joanna Brady novel.

The setting-- the very real old mining town of Bisbee, Arizona-- is pitch perfect. Jance grew up in Bisbee, and you can follow the directions she gives in her books like a road map through the area and the town. When a chase at the end of the book veers onto a dirt "road" that heads up a mountain to the cell phone towers, I had to smile. I've been on that trail, and there's no way a limosine's going to make it in one piece. Strong story and a strong setting. Are you still with me?

If you are, then let's add that cast of characters I mentioned earlier. Throughout the series I've watched Joanna Brady grow as a person, as a wife, as a mother, and as the sheriff of one of the largest counties in the United States. She continues to grow with each book; in this book, she sees her mother in a new light, and she learns something about her father's death that leads her to making a very important decision, a judgment call. Joanna may not always make the right choice, but you respect how she comes to make each one.

It may be Joanna's show in this book and in this series, but she's not the only character you come to care about. Her husband, her children, her mother... you even grow to know and care about Joanna's co-workers and people like Junior, a developmentally disabled man who works at a local diner. Jance's Joanna Brady novels are what I like to call "slice of life" books because they are so real, so down-to-earth, that you feel as though you know these people. You come to care for them, and you come to each new book wanting to know where this latest adventure will take them. If you like to feel involved with the characters in the books you read, come on down to Bisbee, and sit a spell with the Sheriff of Cochise County, Arizona.