Hearse and Buggy by Laura Bradford 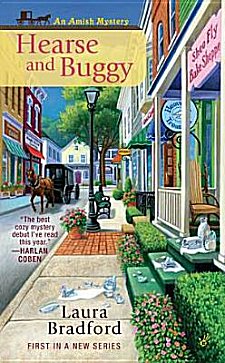 First Line: Claire Weatherly looked around the empty stockroom, kneading the small of her back with stiff, tired fingers.

Claire Weatherly has finally called her marriage quits; her high-powered Wall Street husband is going to have to find someone else to berate and ignore. She decided to stay for a while with her Aunt Diane, the owner of the Sleep Heavenly Inn in Heavenly, Pennsylvania, but after six months, Claire knows she's found the lifestyle she's been craving and the place where she wants to live her life.

Her shop, Heavenly Treasures, is doing well, and Esther, the young Amish woman who helps her, is doing a wonderful job. The former tenant, Walter Snow, had cheated the local Amish out of a lot of money, but once they realized that Claire was not cut from the same cloth, more and more are bringing her their handmade crafts to sell. But when Walter Snow is found dead in the alley outside Heavenly Treasures, Claire knows that suspicion is going to fall on many of her new friends.

Hearse and Buggy is a light, quick, enjoyable read. As Bradford introduces her cast of characters, she imparts quite a bit of knowledge about the Amish, which should please most readers. Claire herself is an appealing main character who has always dreamed of a slower pace of life and has finally found it-- and several new friends as well. And now that she's found what she's been searching for, she's willing to defend it.

Aunt Diane is a level-headed, positive source of support for Claire, as well as being a fount of information about the area and its people. And in this first book, Claire wastes no time in having two very eligible, handsome men looking at her with interest and speculation.

One-- farmer Benjamin Miller-- is Amish and recently widowed. He's available in every way but his faith. The other-- police detective Jakob Fisher-- is Amish and was born and raised on a farm outside Heavenly; however, he decided to become a policeman after vowing to live in the Amish way. As a result, he is shunned and can have no contact with his family or any other member of the Amish faith.

Normally I can do without a strong romantic element in the books I read, but in this case, it's a very interesting angle and gives the characters much more depth. Claire, in particular, can be of great service to Jakob since she has a good relationship with the Amish. She can ask the questions that wouldn't be answered if Jakob were the one asking them.

I didn't find the mystery in this book very difficult to solve, and of the three Amish women portrayed in the book, two were a bit too fragile for my taste, but I did enjoy the book. Bradford has set the stage for what could be a very strong and interesting mystery series.