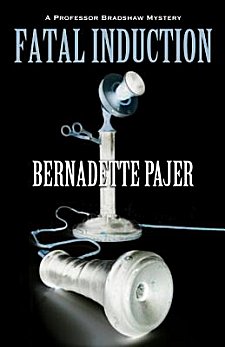 First Line: The first indication that Professor Benjamin Bradshaw's life was about to plunge again into chaos appeared in the form of a flatulent horse eating Mrs. Prouty's broad beans over the garden fence, its huge teeth tugging greedily at the vines.

It's 1901, and another school year is about to begin at the University of Washington in Seattle. The obsessively organized Professor of Electrical Engineering, Benjamin Bradshaw, has everything ready for his classes which allows him time to participate in an electrical competition.

In this second book in the series, we get to see Bradshaw not as a teacher, but as an inventor who can lose all track of time down in his basement-- to the dismay of his housekeeper Mrs. Prouty. Unfortunately Bradshaw is not going to be left to his stimulating muse. Mrs. Prouty insists on complaining about the horse that's been eating her beans for hours, and when Bradshaw goes to investigate, he finds the horse hitched to an empty peddler's wagon. Although he searches, he can find no trace of the owner or his daughter, only bottles of Ralph's Restorative-- a tonic that has been making people ill.

Then the entire nation is thrown into shock: President McKinley is assassinated. But Bradshaw can't get the idea out of his head that a little girl is missing and may be in danger. Although he can't let the girl's disappearance go, he seems to be getting very little help from either his friend, Detective O'Brien, or Detective March, a policeman who tries his best to be helpful.

Trying to be his own investigator down in the Tenderloin (an area on the waterfront where all sorts of saloons, brothels, and other sources of vice abound), Bradshaw quickly learns that the only results he may get as a detective are results he doesn't want: putting his own son's life in jeopardy. Then as a few more pieces of information click together, the professor realizes that there may be a way to get the information he needs: turn his electrical invention into a trap to catch the killer.

I enjoy these Professor Bradshaw mysteries. Pajer's research into Seattle's history brings the city and the times to life in a very natural way, whether it's an amusing scene that lets us know how Profanity Hill got its name or by adding a character named Nell "Harry" Pickerell, a real young lady who preferred to go about town dressed as a man.

Another thing that is so enjoyable about these books is the way in which Pajer makes the history of electricity and of electrical inventions fascinating. We tend to take all things electrical for granted. Unless we live in areas that experience terrifying storms, most of us have never known more than a few minutes scattered here and there when we couldn't turn on a light or reach into the refrigerator for a cold drink. Pajer makes the early days of electricity and the inventors who bent it to their will exciting.

Even better than the historical detail and setting are Pajer's characters. Benjamin Bradshaw has known tragedy in his life. Although he still disappears into a fog of inventive fury, he is slowly coming out of his self-induced solitude and is making friends. His relationship with his son is an important feature in the books, and he even has his eye on a young lady-- although at this point he's still much too shy to do anything about it. (And I certainly wouldn't recommend his inviting Missouri Fremont over to dinner if Mrs. Prouty is doing the cooking!)

Yes, these are characters a reader can grow to care about very quickly, and even though it's not necessary to read the books in order for them to make sense, I think you should consider it so you can see how the characters and their relationships grow and change over time.

The only thing about Fatal Induction that I can't rave about is the mystery itself. Let me rephrase that. The mystery is a good one, it's the identity of the villain that I had trouble with because the minute the person was described I thought to myself, "Bingo!" As to the reasons behind the villainy? I didn't have those figured out at all, and oftentimes that's the most important part of the crime, isn't it?

If you're in the mood for an historical mystery that sets you down right in the middle of Seattle in 1901 with a good puzzle to solve and excellent characters to help you along the way, Bernadette Pajer's Professor Bradshaw mysteries are just the ticket.

Genre: Historical Mystery, #2 Professor Bradshaw mystery
Rating: A-
Source: the author, in exchange for an honest review
by Cathy at Tuesday, September 18, 2012