A Lack of Temperance by Anna Loan-Wilsey 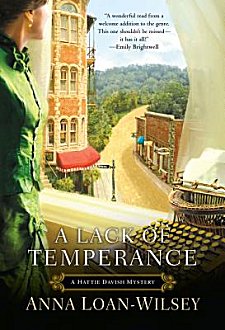 First Line: It was chaos.

It's 1892. Self-described typewriter Hattie Davish has been paid to work for a Mrs. Edwina Trevelyan of Eureka Springs, Arkansas. She boards the train in Kansas City, and when she arrives in the resort town, the very first thing she sees is the American Women's Temperance Coalition (AWTC) trying their best to demolish a saloon. By the time she gets to the Arcadia Hotel, Hattie has learned that Mrs. Trevelyan is the president of the AWTC.

After a short battle of wills with a AWTC member, Hattie assumes control of Mrs. Trevelyan's correspondence, but the woman herself seems to have disappeared. Hattie does as much as she can with the letters and telegrams, then she sets out to find her employer. Shortly thereafter, she finds the woman's body, and when an arrogant woman in the temperance organization tells her she can go home, Hattie refuses. She's been paid for a week's work, and she's going to stay to help find her employer's killer. What Hattie hasn't planned for is that-- by her conscientiousness, she's putting her own life in danger.

Author Anna Loan-Wilsey sets her stage immediately by having Hattie Davish witness the demolishing of a saloon. I can't remember any other fiction book I've read using the background of the women's temperance movement, and as I began reading A Lack of Temperance, I had to wonder why. All the various members created a microcosm of motives, which is perfect for a mystery.

Her choice of Eureka Springs, Arkansas was also inspired. The Victorian resort town's treacherous, twisting streets, steep stairs, luxurious hotels, and many hot springs fired my imagination and created many locations for Hattie to investigate.

Hattie Davish is a young, spirited woman who-- as a traveling private secretary-- is a bit ahead of her time. She's a workaholic who can forget to eat or rest, and in her spare time she loves to explore, finding plants to add to her catalogue. Hattie is meticulous in her work habits, to the point of being what we would call OCD today. Throughout her investigation, she settled her mind by sitting at her typewriter creating lists of facts and lists of questions. It's no wonder this young woman attracts all sorts of other characters to her-- including handsome young doctor, Walter Grice.

I did find the identity of the killer to be a bit obvious, but as a debut book with an 1890s traveling secretary as the main character, I think this series is set up for a very interesting, enjoyable run. I look forward to reading more books about Hattie and to learning more about her mysterious benefactor, Sir Arthur Windom-Greene.