J.A. Jance has been one of my favorite authors for a long time. Denis loves her series featuring J.P. Beaumont while I prefer reading about Sheriff Joanna Brady in Bisbee, Arizona. In fact, those Brady books are a major reason why Denis and I spent our honeymoon in the Copper Queen Hotel in Bisbee while we explored the area.

I'd heard that a J.A. Jance book signing was a special event, so when I heard that she was visiting the Poisoned Pen to sign her newest Joanna Brady book, Judgment Call, I knew Denis and I had to go. It's a good thing I always show up early because fans were already gathering when we walked in the door of the bookstore.

"This is unusual. The cameras usually stop when Bella leaves."

Many attempts were made to find Bella's owners, but no one came forward. Instead Bella found herself a new home with people who love her. She is now a certified assistance dog that is a special help to Judy when she's in a hotel room and has taken off her hearing aids.

Naturally well-behaved, Bella is polite with all the people who come up to say hello and ask if it's all right to pet her.

But she has no real interest in any of us mere mortals. The center of her world is wherever Judy is. (And isn't that the way it should be?) Besides, all the bellmen and valets at the Ritz Carleton know Bella by name!

From the beginning, Judy mesmerized us by talking about her beloved cousin, Polly Johnson, an extremely talented young woman who started out at a local television station in Rapid City, South Dakota. She then went out to Lodi, California, and became a gospel singer. At the age of twenty-four, she received a Congressional Medal for her work with youth. The morning Polly was to leave to receive the medal, Judy got an advance copy of Polly's very first record called "I Found the Answer."

Polly's plane exploded over California, the first instance of domestic terrorism in the United States. "I Found the Answer" landed-- undamaged-- in a field several miles away.

While Judy and her family were living in Bisbee, Arizona, Polly had visited them. For three days she strummed a guitar and sang, and everything was recorded on an old reel-to-reel tape recorder. Much later, Judy's nephew remastered the tapes, transferred everything to CDs, and gave the CDs to the entire family as gifts.

Judy sang one of the songs she'd loved to hear Polly sing, and she recited a poem she'd written about her cousin. "Fifty years later, I don't remember the guy's name. I don't remember who blew up that plane killing all those people. I remember Polly, and I hope for the same thing for all the survivors of the tragedy in Aurora, Colorado."

"Some readers prefer J.P. as a drunk. They'll be happy with Second Watch." 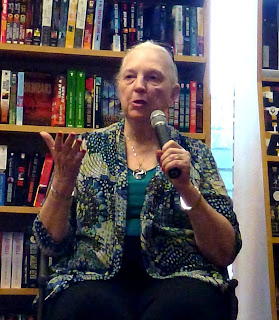 After that very touching and heartfelt moment, Judy began talking about her series set in Seattle which features J.P. Beaumont, who "works for S.H.I.T." (Special Homicide Investigation Team) Judy's publisher turned J.P. into a series when she had absolutely no intentions of writing a series. "If I had, I would've made him a lot younger now that I'm working on book #21!"

When she began writing the very first Beaumont book, she realized that reference librarians are indeed a writer's best friend. Judy relied on her local reference librarians, who provided her with not only all the Seattle information she needed, but the whys and wherefores of forensics, too.

Judy was married for eighteen years to an alcoholic (AKA "The Rat"), and for a while she would follow him to bars and sit listening to all the guys talk. That firsthand knowledge stood her in good stead when creating the character of J.P.

It didn't take long for Judy to realize that there's usually at least one nutcase at a book signing:

"I've just got out of prison for killing seven people. Would you like to write your next book about me?"

Then there's the police officer who told her that reading about J.P. made him realize that he was a drunk, too. Immediately after graduating from the police academy, he went into treatment. He's now chief of police where he lives.  He introduced Judy to his daughter: "This is my daughter, Morgan. My wife wouldn't let me name her J.P."

"Don't make mystery writers mad. We have our ways."

By book number nine, Judy wanted to kill off J.P. Beaumont. It was her editor who persuaded her to rewrite her unpublished first novel. She did, and that book became the excellent Hour of the Hunter, which-- to this day-- remains Judy's favorite book. The original manuscript was 1200 pages long. Not only did the size have to be greatly reduced, other things had to be changed as well, and this is how the bad guy became a professor of creative writing at the University of Arizona. You see, in 1964 a professor at the University of Arizona turned Judy down when she applied for the creative writing program. Why?  Because she was a girl. "That [the killer's profession] wasn't an accident," Judy told us. "If you know someone who writes murder mysteries, don't ever make them mad. We have our ways!"

At about this point, I began labeling Judy's editor a genius because he then suggested that she begin writing a second series. J.P. was making too much money, and her editor didn't want to lose him. If she had two series that she could alternate writing, she wouldn't tire of either. Thus began the life of Sheriff Joanna Brady.

"Your own life inevitably leaks into the book you're writing." 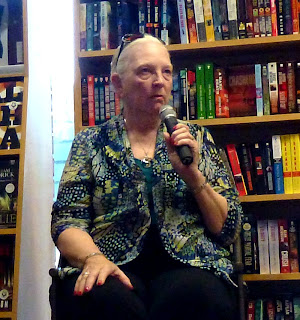 Judy, who sits in her favorite chair in the family room, to write her books on her laptop, doesn't outline her books or her series. But when she began writing the Joanna Brady series about a single mother who becomes sheriff of Cochise County, Arizona, she purposely set out to create something a bit different.

Judy Jance is six feet tall. Joanna Brady is five feet two. This is intentional because, as Judy says, "This forces me to look at life from Joanna's point of view." Moreover, while the Beaumont series is written from the first person male point of view, Joanna's stories are written in the third person. Yes, there are differences, but Judy's life has certainly leaked into the books about Joanna Brady.

Joanna's mother, Eleanor Lathrop, is based on Judy's own mother Evelyn. (Evelyn really liked the character of Eleanor, by the way.) Judy had us laughing with stories of her mother, who never said a word when her son came home from Vietnam with marijuana. Not a word. One day Judy's brother came home and felt like lighting up only to find that his stash had been thoroughly mixed with dried cat turds and thrown in the garbage barrel out back before being set afire.

Their mothers are not the only common ground Judy and Joanna have. They are both members of the Last Parent Standing Club. To be a member, you must have at least one child, and your spouse must be dead. To a child, the dead parent is not only dead, but perfect. This happened to Judy when her children were aged eight and ten, and it happens to Joanna Brady when her daughter is roughly the same age.

I don't know about any of Judy's other fans, but this leaking of her life into the lives of her characters make her books very real to me. When Denis and I stay in Bisbee twice a year, I feel like stopping by to say hello to Joanna each time we drive past the Cochise County Sheriff's Office. There are very few fictional characters I feel that way about.

"Did I see you taking notes?"

I can't begin to tell you how quickly that hour flew by. I think most of us would've been quite content to stay much, much longer to hear everything this talented writer wanted to share with us.

When it came time for Judy to sign my copy of Judgment Call, her eyes narrowed a bit when she looked at me. "Did I see you taking notes?" she asked. I pleaded guilty, telling her that I was a book blogger and would be sharing the evening with my readers. I also thanked her for being the very first author to contribute to my Scene of the Crime interview series.

"And there's something else I'd like to thank you for. It was due to you and Joanna Brady that Denis and I decided to spend our honeymoon at the Copper Queen Hotel."

"Oooh, for heaven's sake!" And Judy laughed and laughed.

And if you have the chance to attend one of her author signings in the future, I hope you do.

Just remember to show up early if you want a good seat!