A Cotswold Ordeal by Rebecca Tope 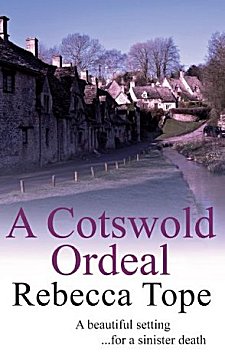 First Line: It was difficult to avoid the conclusion that Hepzibah did not initially like it at Juniper Court.

Hepzibah the cocker spaniel is accompanying Thea Osborne on her second housesitting assignment in the beautiful area of the Cotswolds in England. Although the dog isn't enthused with the geese that quickly come to threaten them in the yard, Thea is looking forward to staying at Juniper Court.

The Phillips family seems very laid back and casual, and if Mrs. Phillips seems a bit rushed, most mothers would be when trying to pack up four children and a husband for a two-week holiday in Ireland. Besides, all Thea has to do is a bit of very light housekeeping and making sure that the old, crotchety pony is fed-- along with an assortment of other furry pets and assorted barnyard fowl. Ah yes, she's going to take walks and read; it's going to be a nice change from her first experience when a murder victim was discovered on the property on which she was staying.

But we all know about best laid plans. An apparent suicide takes place in the shed where the pony is kept, and once more Thea finds herself dealing with Detective Inspector Hollis, a man who makes her heart beat a little faster... whenever he's not infuriating her. To add to the difficult situation, Thea's married sister makes a frantic phone call and appears at Juniper Court, insisting that she stay with her older sister for a few days. When the house is broken into and it becomes clear that there are people who want Thea and Jocelyn out of the house now, the intrepid housesitter finds herself torn between fear and her sense of obligation to the Phillips family. Is Inspector Hollis going to be able to figure out what's going on before the situation becomes even more life-threatening?

The 408 pages of this book flew by. Although Tope makes it clear that this area is filled with one small village after another, she also conveys how isolated they are. Thea, who loves canals, tries to find her way through the woods to walk along a disused canal and is lost more often than not amongst the trees and a confusing labyrinth of footpaths. Juniper Court may be close to a village or two, and there may be neighbors relatively close, but those woods and those tangled paths make everyone and everything seem miles away. (In doing a bit of research on the author, I learned that all the villages in which these books are set are real. Tope makes sure she visits all the pubs and walks many of the footpaths, but she never talks to any of the locals... so none of them can claim to be featured in one of the books.)

The cast of characters in this book is a large one. All the villagers and neighbors seem to have their own agendas and are often at cross purposes. Some are against restoring the old canal; some want it done. Others want planning permission to turn an old barn into a luxury home for the rich; others are against it. Every time Thea leaves the property, those who want her gone seem able to move in and out of the buildings at will, which really gives the book a sense of unease.

It's a good thing that her younger sister shows up on the doorstep. At first Jocelyn shows all the annoying characteristics that made her the least favorite sibling, but as she and Thea get a chance to talk with each other, Jocelyn's strong points come into play. There are even several humorous incidents when both women have to deal with some recalcitrant young people. It's also good to see how Jocelyn reacts to Thea's growing interest in Inspector Hollis, whom she met in the first book in the series. Hollis seems unable to decide whether Thea should be a part of the investigation or no, and he certainly can't stay away from her!

There was so much going on throughout the book that I found it impossible to keep track of names and motivations, so I just enjoyed the interaction of the characters until all was revealed by book's end. Now I'm eager to discover the identity of the next family who takes on Thea as a housesitter. In book three, will her reputation as the deadly housesitter precede her?

Although mention is made of Thea's first attempt at housesitting and of her prior meeting with Inspector Hollis (in A Cotswold Killing), it's not necessary to read that first book. A Cotswold Ordeal stands on its own very well as an evocation of place and as an intriguing mystery filled with engaging characters.