The Joy Brigade by Martin Limón 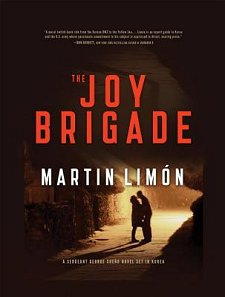 It's the early 1970s in South Korea. US military police officer George Sueño is being sent on a very important mission. Kim Il-Sung intends to reunite North and South Korea before he hands over control to his son. This means that North Korean forces are planning to cross the DMZ and overpower the South Korean government. Sueño's mission is to prevent this by sneaking into North Korea to obtain an ancient map that details a network of secret tunnels that runs beneath the DMZ. To do this, he must go undercover into the heart of Communist North Korea.

His mission-- almost impossible to begin with-- is further complicated due to his skepticism and to the fact that the keeper of the map is Doc Yong, a former lover who had to flee South Korea the year before. The plan rapidly begins to unravel. Rhee Mi-Sook, a leader of the North Korean secret police, is hot on Sueño's trail, and it's all his contact, Hero Kang, can do to keep them one step ahead. Things are looking bleak indeed when Sueño is captured. Is he going to survive long enough to find out what a group of women called the Joy Brigade has to do with this mission?

Limón is an expert angler because he hooked me immediately. There's no setting the scene or long explanations of what's going on. Sueño has started out on the mission on the first page, and he's scared to death. This character is no Superman. He's a normal guy who gets scared, doesn't like pain, and prefers not to take unnecessary risks. However, he's in the military, so he has to follow orders. At least he has an incentive named Doc Yong to keep him going-- not that he has much of an alternative since things begin to go wrong very quickly.

This author portrays Koreans with great sensitivity. On the run and hiding in the rural areas of a hostile country, Sueño finds no difference between the Koreans of the North and those of the South. The real difference lies in how the people of the North have been systematically brutalized by the government that's supposed to have their best interests at heart. Reading these books set in the 1970s will help any reader to understand the North Korea of today.

More than once Sueño has to place his trust in people who are his sworn enemies. More than once he has to put himself in danger in order to do what's right. Rhee Mi-Sook, the beautiful North Korean secret police officer who's tracking him down, is a complex and compelling character. Her government has twisted her into a brilliant sociopath, and I wouldn't mind seeing more of her in future books.

Is there torture and sex in this book? Yes, but none of it is graphic or gratuitous. Through it all Sueño must keep focused on his objective. He doesn't dwell on what happens. It's happened, and he must keep on going. Since he's the one telling the story and he doesn't want to dwell on pain or humiliation, we don't get buried in the details. Since I'm not a fan of pain or humiliation myself, my imagination worked just fine with what it was given, and I appreciated Limón's light and controlled touch.

I value this series for its neatly plotted action and intriguing mysteries. I value it for its portrayal of a wonderful people and their culture. But more than that, I value these books for the characters and their relationships with each other. George Sueño and Michael Connelly's Harry Bosch would get along just fine because the two of them both believe "Everyone counts, or nobody counts."