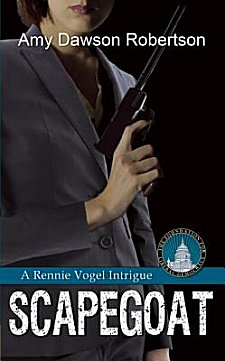 First Line: The rain had been coming down hard for days all over the West Virginia Panhandle.

When a covert government operation goes wrong and becomes fodder for the press, someone's got to take the blame, and with regard to the botched mission in Tajikstan, Rennie Vogel is the chosen scapegoat.

Shuffled off to a dead-end assignment in Turkey, Rennie descends into depression, forgetting to exercise her body and her mind but remembering to drink, smoke, and stay awake through the endless nights agonizing over the rubble that's left of her career. For years, she's wanted a job where she could serve the country she loves, a job where she could truly make a difference. When she's finally forced completely out, she has nothing left. Even Hannah Marcus-- the woman she rescued in Tajikstan and came to care deeply for-- has moved on. The government has forced them to agree never to get in touch with each other.

Hannah Marcus takes a safe job at a newspaper while recovering from her traumatic time as a hostage, but that job soon palls. She, too, wants to make a difference, and she soon learns of a homegrown terrorist group in North Dakota. Hannah quits her job and goes freelance, traveling to North Dakota to uncover everything she can about the group.

In the meantime, one of Rennie's former adversaries offers her a job. She's never heard of The Foundation, but they've heard of her. When asked if she'd be interested in a rather illegal but honorable job, she eventually overcomes her misgivings and agrees to work for the group. She soon finds herself on the way to North Dakota. She and Hannah are set on a collision course with some very dangerous people.

The character of Rennie Vogel fully engages me as a reader, and she often brings out clashing emotions in me. While she wallowed in self-pity long enough for me to want to shake her, I have to admit that the woman has the worst luck with her employment and her personal life. She's cut off from her family-- her mother in particular-- and her wish list is short: (1) to find people who will accept and love her for whom she truly is, and (2) to have work that fulfills her need to serve her country and to do good. She's really not cut out for government work; she is too moral for that line of business. To Rennie Vogel, collateral damage is not acceptable-- "People aren't peripheral." (It's a sad state of the world's affairs when hearing someone say this is so refreshing.)

Although the action took a while to get started, once it did things moved quickly, and Robertson had more than one surprise in store for me toward book's end. The author does an excellent job of portraying a very strong yet conflicted character. Rennie Vogel is the type of character who can (and hopefully shall) go far in a series.