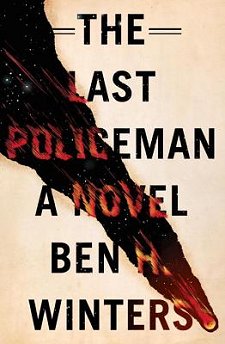 First Line: I'm staring at the insurance man and he's staring at me, two cold gray eyes behind old-fashioned tortoiseshell frames, and I'm having this awful and inspiring feeling, like holy moly this is real, and I don't know if I'm ready, I really don't.

Young Henry Palace has wanted to be a police detective for as long as he can remember, and this is his first homicide case. He's in charge, but he's the only person in "Hanger Town" who believes Peter Zell was murdered. He's going to have a hard time getting people to believe him, not only because it's his first case, but because he's moved up the promotion ladder very quickly due to several senior officers going bucket.

You see, there's this asteroid called Maia that's about 7 kilometers in diameter, and on October 3, it's going to put an end to this world as we know it. When scientists finally agreed that October 3 was The Date, people began acting very strangely. Millions got religion. Millions "go bucket [list]"-- abandoning their jobs with no warning and taking off to do something they've always wanted to do. Millions of others are committing suicide, and each city seems to have its own preferred method. In Concord, New Hampshire, it's suicide by hanging, which leads to the city being called "Hanger Town."

Watching this young man piece things together in a society that's falling apart is one of the best reading experiences I've had this year. Most people's attitude towards his behavior is "What's the point in solving murders if we're all going to die soon, anyway?" Those people may have a point, but there's something to Palace's insistence on doing the best job possible, on justice, on doing what's right and good that's downright endearing. He never thought finding a murderer was going to be quite so hard, though: "It's exhausting. People hiding behind the asteroid, like it's an excuse for poor conduct, for miserable and desperate and selfish behavior, everybody ducking in its comet-tail like children in mommy's skirts."

I've been a fan of pre- and post-apocalyptic fiction for years. I love to envision how the author pictures the world unraveling... or how it tries to put itself back together after unbelievable calamity. The best and the worst of human behavior, all within the covers of a book. I can now say that I've read my very first pre-apocalyptic police procedural, and I love it!

I love Ben Winters' vision of the world coming to an end. Of how people behave, of how civilization starts breaking down before the end is even looming in our headlights. But as riveting as the author's vision is, it's the character of young Henry Palace that's the heart and soul of the book. Watching him stumble through his first investigation. Seeing his anguish when he fails to follow his intuition or to put the clues together in time. As I read, I just knew that this young man would be one of the best homicide detectives ever... if it weren't for October 3. All this, and poignancy, too.

I am so glad that this is the first book in a trilogy because I am simply not prepared to let loose of Henry Palace. The next book in this series cannot come soon enough!