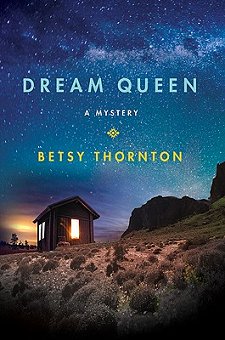 First Line: It seems like so very long ago that I boarded the plane from New York City to Arizona, on my way to the small town of Dudley, to see my little brother Danny and to see Hal, and, in fact, it was long ago-- before cell phones came along and BlackBerrys and computers you could Google on.

This sixth book in the Chloe Newcombe series is actually a prequel, telling us what brought Chloe to Dudley, Arizona.

Two years after her older brother, James, died of AIDS in California, Chloe has ended her relationship with an alcoholic ex-cop. She decides to take a short break from being a private investigator in New York City to visit her younger brother, Danny, in Dudley, Arizona (a very thinly disguised Bisbee). James' partner Hal owns a house there where Danny has moved in with Kristi Marsh, a troubled and beautiful young woman.

When Chloe's flight arrives in Tucson, she's met by Danny and Kristi, and they begin the long drive to Dudley. In Benson, the van breaks down. Danny sends the two women across the street to a diner while he stays at the garage to oversee the repairs. Time passes, and no sign of Danny. When Chloe walks back to the garage to see what's going on, the mechanic tells her that Danny got into a car with another man and drove off. Danny never comes back.

Chloe knows that something is desperately wrong, but she has an extremely difficult time convincing local police of it. There's nothing for Chloe to do but get in the van with Kristi and drive to Dudley. Then Kristi vanishes and is later found shot to death. Now the police are very interested in finding her ex-con brother Danny. Chloe knows that she's the only real chance Danny has of getting a fair break. But where is he? Is Danny still alive?

Before I even say anything about the book itself, I want to say that I love the cover (and I'm not a reader who sets much store by book covers)! The artist didn't quite understand the steep slopes of the Mule Mountains with old wooden houses valiantly clinging to their sides, but it's close. And the sky? The sky is totally right. Enough art interpretation!

In many ways, it feels as though main character Chloe Newcombe is sitting on her porch looking at the book cover sky and reliving a memory that she'd like to change. The book is not told in the manner of a flashback, though. In a very few paragraphs, her plane lands in Tucson, and we're completely back in the 1990s when Chloe first stepped foot in the old mining town of Dudley.

Chloe's faith in her younger brother is absolute. She's never pretended that Danny's led a blameless life, but she knows what he is capable of. Abandoning the woman and the sister he loves in a diner alongside the interstate is not something Danny would do. Chloe does whatever needs to be done to try to find him-- and then she adds finding Kristi's killer to her list.

One of the things that made the biggest impression on me was the feeling of exhaustion throughout the book. This is a woman who's going through an unhappy time in her life; she's in a completely unfamiliar place and climate; she's getting very little help from anyone; she seldom feels like eating; and sleep is a stranger. But her sheer determination is awe-inspiring. Many people reading the book won't pay all that much attention to the miles she racks up driving to Benson and Tucson, back to Dudley, then back to Tucson to hop a plane to fly to California to drive to someone who may have some information she's looking for... then back to Dudley. The trips to California are day trips. Tucson to Dudley is a ninety-minute trip one way. This made me tired, and I wasn't behind the wheel. The woman certainly deserves frequent driver miles.

People have died, others have disappeared, and some of the people Chloe knows aren't whom they appear to be. Through her sadness, worry and exhaustion, she's got to sort that all out and pray that it all turns out for the best. From the light fog of dread that drifts throughout the book, it's a sure thing that not everything is going to end well. But it won't be for the lack of trying on the part of one solitary, worn-out woman fighting for the people she loves.

I liked being able to see what brought Chloe to her life in Dudley. Was I drawn in by her plight? Absolutely. At the very least I wanted be her chauffeur so she could get some sleep!

If you haven't read any of the other books in the series, you aren't going to be lost by picking this one up. (It's a prequel after all.) When you're finished, you just might want to read more about Chloe Newcombe, and there are five good books waiting for you.