An Unmarked Grave by Charles Todd 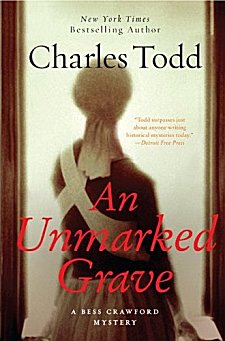 First Line: I stopped just outside the ward and leaned my head against the cool wood of the doorframe.

It's the spring of 1918. Not only are Bess Crawford and all the other nurses and doctors having to contend with an unending stream of wounded men from the front lines in France, they have to battle another killer: the Spanish Influenza.

A trusted orderly takes Bess to the area in which the dead are kept before they taken out for burial, and he shows her that there is one more dead soldier than there should be. After checking the records and looking at the man's body, it becomes clear to Bess that this man (a friend of the family) has been murdered, but before she can tell the commanding officer of her suspicions, she falls victim to the flu and is taken to England to recuperate.

When she is strong enough to return to duty, she keeps her promise to the orderly and informs her father, the "Colonel Sahib," of what happened, but there's not much that can be done. The soldier's body has been buried, and the only other person who saw the body-- the orderly-- has hanged himself.

Bess knows that something's just not right, that someone believed "one unmarked grave more or less wouldn't be noticed," so she begins to piece together what little information and evidence she can. But when another nurse dies, and someone very nearly succeeds in killing Bess herself, she knows that she somehow has to stay safe from this very determined killer so justice can be done.

This series continues to get stronger-- especially when the books (like this one) have so many scenes in the war zone in France. Battle not only shows Bess at work, it heightens the feeling of danger. The writing duo of Caroline and Charles Todd ratchet up the danger and suspense even further with the killer who seems to see all, know all, and be everywhere at once. Bess isn't safe, and neither is anyone who tries to help her.

I came nowhere close to deducing the killer's identity, and I actually breathed a sigh of relief when the capture was signed, sealed and delivered. The series is also hinting rather strongly at possible romance in Bess's future. Possible, that is, if Bess ever realizes what's right under her nose!

If you have yet to read any of these Bess Crawford mysteries, give this one a try. It stands very well on its own, but don't be surprised if you want to go back and read the others once you've finished An Unmarked Grave. I also highly recommend this series for any readers who are fans of Jacqueline Winspear's Maisie Dobbs series or Suzanne Arruda's Jade del Cameron books.