Shadows of Death by David Sundstrand 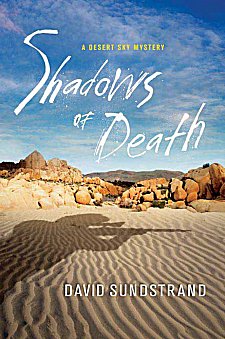 First Line: This time the dead animals were in human form.

Seth Parker is a self-appointed vigilante. If he catches a person showing cruelty to an animal, that person will pay dearly.  How dearly? Here are three examples:

A man who cut the beaks off pelicans for stealing his fish was found dead and lipless. The owner of a dog fighting ring is found torn to pieces by his own dogs. Two teenage boys who posted a YouTube video showing themselves blowing up cats are missing, and no one expects to find either of them in one piece. This is the sort of work that Seth Parker has become known for, and that's the reason why he's wanted by the FBI.

Frank Flynn is a law enforcement agent for the Bureau of Land Management. As a person who loves the Mojave Desert and the wildlife that can be found there, he has to admit that he sympathizes more with Parker than he should. Flynn reads about what Parker's been doing until Parker moves into the Mojave and kills two poachers for using wild burros as target practice. Now he's on Flynn's turf, and although Flynn seems able to guess Parker's next moves, he can't seem to get ahead of the killer.

Flynn would rather take a beating than provide any sort of protection at the opening of Sand Canyon, an exclusive hunting resort where the well-heeled can use the latest firepower to kill sedated big cats and other wild game, but that's exactly what he's assigned to do. He knows Parker's going to be there with plans to take down as many people as he can. Now all Flynn has to do is stay alive long enough to bring Parker to justice.

If you're a reader who respects the environment and loves wildlife, you can't go wrong by picking up either of David Sundstrand's Desert Sky mysteries, Shadow of the Raven and Shadows of Death. These two books are filled with beautiful descriptions of the desert and its plants and wild creatures.  Frank Flynn has the perfect assignment: protecting the land and the animals that he loves so much, but it's not easy...

"This is where I grew up, and I'm watching it start to die. You know what that's like? People come up here, tear up the land, dump trash, go home, and water their lawns-- with our water." He turned to Linda. "They bring their guns and act like the valley's a shooting gallery. Shoot at anything that moves."


Although he likes and admires his boss and has a good relationship with his girlfriend Linda, he can be very abrasive with people who treat the environment as their own private garbage dump and playground. After dealing with those types, the best thing he can do is spend time in his converted railroad caboose out in a remote corner of the desert.

Sundstrand does an excellent job of portraying the landscape in all its unforgiving beauty and frailty. He also shines a spotlight on a fact that few people give much thought to-- that many areas in the desert Southwest have had their water taken from them so that people in large metropolitan areas like Los Angeles and Phoenix can have their green lawns and swimming pools.

But as good as the writing is about the landscape, it's just as good when it comes to the plot and to how the story unfolds. Frank is dealing with a brilliant, deranged killer on the one hand, and with uncooperative colleagues on the other. When he and Seth Parker meet at Sand Canyon, the action is fast, furious, and bad for the blood pressure-- but oh so good to the last page.

Both books in the Desert Sky series stand alone well, but I recommend reading them both... for the character of Frank Flynn and for the evocative picture Sundstrand paints of the Mojave Desert.