Scene of the Crime with Author David Sundstrand!

Last year, I read a mystery set in the Mojave Desert (Shadow of the Raven), and not only did reading it make me want to get my hands on the other book in the series, it made me want to get to know more about the author. David Sundstrand has written two exceptional books that I call "environmental" mysteries because the setting itself plays such an important role. Having gone out on some extremely rough trails in the Arizona portion of the Mojave, I loved being able to read mysteries which are set there and written by someone who knows the area so well.

Tomorrow you'll be able to stop by and read my review of the second Desert Sky mystery, Shadows of Death, but before we get to today's interview, I thought I'd share a few links so you can learn more about this talented writer. 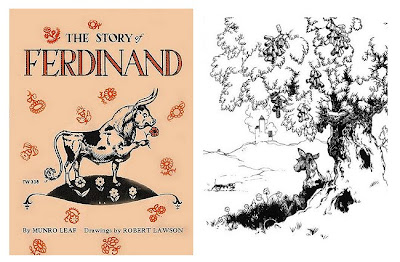 The Story of Ferdinand, written by Munro Leaf and illustrated by Robert Lawson.

It’s a wonderful story of a peaceful soul and the discovery of courage, but the memory that comes flooding back to me is Robert Lawson’s illustration of Ferdinand sitting under his favorite cork tree with perfectly shaped corks dangling from the branches.

Ferdinand and I came into being in 1935, so I find myself wandering in and out of the past, the temporal borders less and less distinct.  The same may be said for the separation between the material world I presently inhabit and the fictional world of my creation, which seems more tangible with the passage of each day.  Okay, I like spending time in the Mojave Desert and cheap bars.

My hometown is Pasadena, California.  I live in Reno, Nevada, so let’s deal with Reno.  I’d recommend a bike ride along the Truckee River that meanders through Reno and Sparks.  This would be especially good amidst the fall colors of the cottonwoods.  Walter Van Tilburg Clark entitled his autobiography The City of Trembling Leaves, a particularly lovely and apt title, like his writing.

Ah well, Robert Shaw comes to mind, just the right touch of suppressed menace.  I believe many of my former students would second the selection.  Oh yes, I know he’s dead, but total control is total control.  Hubris is the best thing about writing.  It’s the author’s world, where one can reward the just, punish the malignant and mock the fools—and resurrect the dead for just the right part.

Fat Ollie Weeks is a wonder.  He is a tribute to the craft of Ed McBain, a pen name for the late Evan Hunter.  Fat Ollie is an ignorant (but not dumb), bigoted and successful detective in McBain’s later 87th Precinct novels.  McBain gets the reader to care for this walking pariah, an absolutely astonishing tour de force.  I think McBain fell under the spell of his creation.  Near the end of his career he wrote Fat Ollie’s Book.  I won’t summarize other than to say that Fat Ollie turns author, hence a double-entendre in the title.  It’s a must read for any writer of detective fiction.  A masterpiece of craft and compassion. 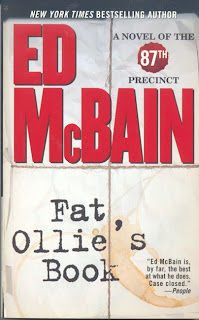 It appears I have passed through this door.  What more to say about Fat Ollie’s Book except that as we glimpse Fat Ollie’s foray into fiction, we observe the master craftsman at work interconnecting Fat Ollie’s dreadful prose following the adventures of Olivia Weeks (Ollie’s fictional stand-in) into the central story.   McBain interweaves structure and theme so effortlessly the book appears to have written itself.

I took my wife to dinner because she had suffered through the five years of flaming enthusiasm and confidence into the sorry depths of despair, only to lift me up with a much more level-headed appreciation of the process.  Who can one share these moments with but someone close to the heart?

My first encounter with my book in a bookstore took place in Vroman’s Bookstore in Pasadena.  I asked a clerk to look up the novel for me, and then I stood before it, breathed deeply, took it from the shelf, pretended to browse the contents and carefully reshelved it.  The moment was every bit as satisfying as I had imagined.

Parnell Hall’s video says it all for a new author.  You show up with a singing heart to find a cluster of one and leave with a leaden belly.  Ah well, I don’t mind all that much.  Small parts of a dream are better than none at all.  For a former teacher, there was the additional benefit of encountering past students, who had seemed to have aged a great deal while I remained unchanged.

Anything that opens the door to reading is a good thing.  eBooks do that.  As for me, I’ll take the heft of the printed page, even War and Peace.  My old books are chock full of notes that reflect my misunderstanding of the text, a story of their own.  The books that came from my long gone pal still have coffee and beer stains on them, depending on whether it was breakfast or lunch, occasionally these are set off by smears of grease, most likely from a leisurely lunch at Ralph’s Burritos, where we grabbed a heart stopping lunch before returning to the ship to unload cargo along the docks in San Pedro.  I love turning the pages of my mother’s battered cookbook dog-eared at her favorite recipes.  Rereading her collection of David Dodge mysteries knowing that my fingers are touching hers through a paper window in time lifts my heart.  Me, I think of cans and wire as a cell phone, and although I do appreciate the spread of semi-literate work (unkind that, I know), absolutely nothing can replace the physicality of a book.

Thank you so much for spending this time with us. It's wonderful having this opportunity to get to know you a little better!