To see what other participants have posted, visit Saturday Snapshot's base, At Home With Books. You'll also find the easy rules and regulations there, just in case you want to join in the fun. (Of course you do!)


Last week I didn't participate in Saturday Snapshot because Denis and I spent the week at our favorite place to relax: Mule Mountain Cottage in the mountains outside of Bisbee, Arizona, just a few miles north of the Mexican border. We indulge in the best pizza either of us have ever eaten anywhere at Bella Roma Pizza in historic Old Bisbee, and we both do a lot of reading as well as pursuing separate interests. I have my "Bisbee Routine": in bed by midnight, up by 5 AM (leaving Denis to sleep as long as he likes), breakfast, and then I set up my observation point just outside the door.

Observation point? It consists of a small table with a tray containing a tall glass of raspberry iced tea, a book, and my camera. I top it off with a comfy white wicker rocking chair, and I'm set for the morning. I'll be sitting in the shade until about 11 AM, with a view of mountains, trees, a birdbath, and a hummingbird feeder. I can actually get a lot of reading done out there because-- even though I'm really after photographs of wildlife-- I depend on my hearing more than my eyesight. Many critters are so shy that they won't move unless they think my nose is buried in my book, so I read and listen... occasionally moving my eyes above the page without moving my head.

One day, my little corner of heaven was like Grand Central Station for many of the critters in the area. The only visitor I didn't get a photo of was a desert cottontail that hopped within three feet of me. If I'd reached for my camera, it would've been off like a shot!

Enough yakking; it's time to share two of my visitors with you. It all started when my nose was buried in a good book and I heard unusual noises somewhere out in front of me.... 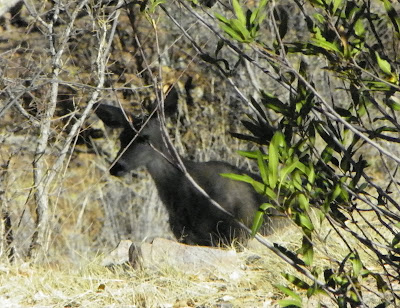 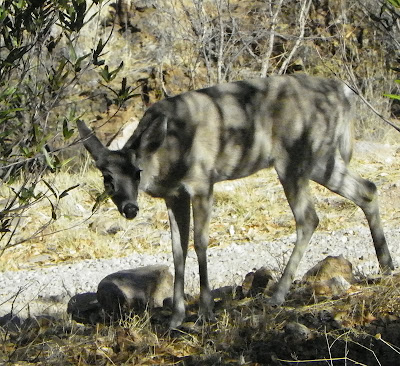 The youngster was very interested in something, but wanted to make sure that I posed no threat. 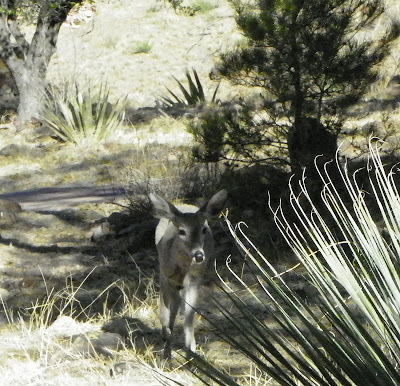 As he moved closer, the doe (a shadow in front of the small pine tree) came across the drive. I could not believe how close they were getting-- and neither showed any signs of stopping! 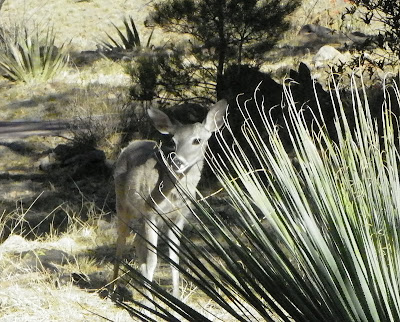 The two of them came closer... closer... 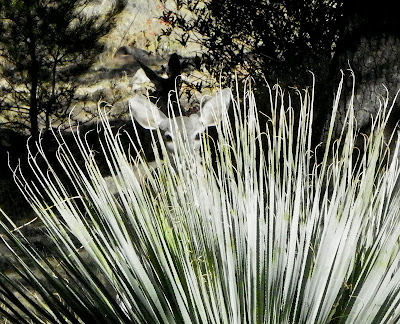 ... until the young buck was standing behind a yucca just fifteen feet away from where I was sitting! Alas, I was not to find out just how close those deer would come. One of the owners' dogs came running up the drive, barking up a storm, and frightened them both away. Blast! 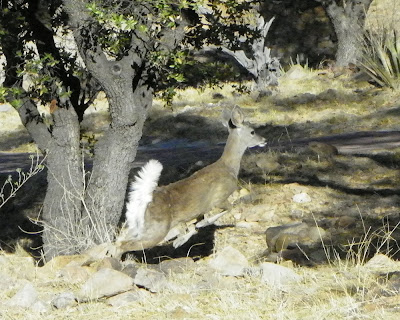 I have to admit that I was so focused on the deer that when Rusty started barking, I jumped about a foot off my rocker! 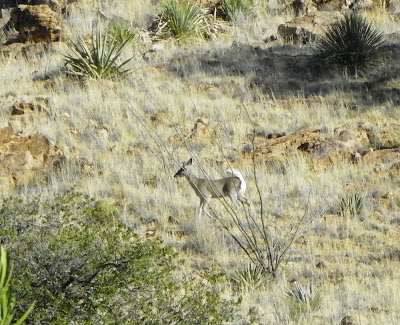 The last I saw of them, they were headed back over to the other side of the mountain. It was only then that I realized that I'd forgotten to breathe for the very few minutes they were there. What a special moment!