A Spark of Death by Bernadette Pajer 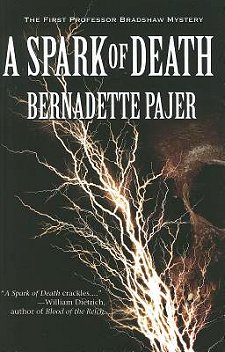 When A Spark of Death begins, Professor Benjamin Bradshaw of the University of Washington is allowing a struggling student extra time to finish an exam. When the power goes out later, this electrical engineer rushes to find the cause and discovers the body of Professor Oglethorpe inside the Faraday Cage of the Electric Machine.

Shortly thereafter, Bradshaw's carefully structured and controlled life shatters. It's a well known fact that Bradshaw had absolutely no use for Oglethorpe, and this single detail makes him the one and only suspect as far as the police are concerned. Bradshaw has no alternative but to conduct his own investigation. Being a widower and the father of a beloved young son, Bradshaw has too much to lose.

Bernadette Pajer loves to do research, and she weaves the history of Seattle seamlessly into her story. The investigation takes on even greater importance due to the fact that during a visit to the University, President McKinley was scheduled to see both the Faraday Cage and the Electric Machine. Was this murder a dress rehearsal for the president's visit? Pajer also has Bradshaw visit the Snowqualmie Falls power plant, which turns out to be a very thrilling episode indeed.

I enjoyed this book a lot. It is fast-paced, and although my antennae twitched the first time a certain character was introduced, Pajer did an excellent job of distracting me. Historical mystery fans as well as those familiar with the eccentric and colorful history of Seattle should rapidly fall into the "Oh, I have time for one more chapter" trap (as I did).

I only have one small quibble: Pajer creates an excellent cast of characters-- Bradshaw's Cockney housekeeper Mrs. Prouty, his son Justin and his lodger Henry, as well as Henry's niece and various students, but Bradshaw is the only character who's explored to any degree. Bradshaw is a fascinating man, but I do hope that Pajer fleshes out the other characters in future books. Are there future books to anticipate? You bet there are: Fatal Induction, the second book in the series became available this week, and I look forward to reading the further adventures of Professor Benjamin Bradshaw.