Scene of the Crime with Author Aline Templeton!

One of my very favorite crime fiction series features "Big Marge" Fleming, a detective inspector living in Galloway, Scotland. Her husband is a farmer, her children are teenagers, and her work is demanding. Fortunately her husband is a treasure, her children don't behave like typical teenagers all the time, and her co-workers are a fascinating group of characters in their own right.

Aline Templeton is the incredibly talented creator of all these characters, and between her characters and her stories, she makes her readers feel right at home in southwestern Scotland.

(On a small trivial note, when I was doing a bit of research on Aline, I happened to see that she grew up in Fife, on the eastern coast of Scotland, in a fishing village named Anstruther. That one little detail made me smile because long ago, some of my ancestors lived in Anstruther, too. See? I told you it was a small trivial note!)

If you haven't read any of her books, I highly recommend them. Aline has also written standalone novels, so if you'd like to see more information about her books, visit her page on Stop, You're Killing Me. Visit Kittling: Books tomorrow to read my review of Lamb to the Slaughter, the fourth book in the DI Marjory Fleming series. Now let's get to the fun part-- the interview! 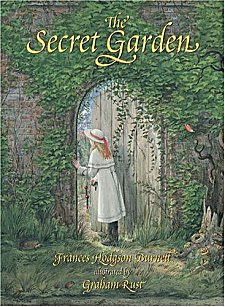 It would have to be Frances Hodgson Burnett's The Secret Garden.  I was, I suppose, about eight or nine and we didn't have a TV at home.  However, one of my friends did - I say, 'friend' but to be honest I didn't really like her very much, but I did like the magic box and regularly went round to play.  My passion was a children's serial called The Secret Garden, and it was so wonderful, and I remember it so clearly, that I've never watched any of the remakes in case it spoils it for me.  I was desolate when it finished.

Then I was in a bookshop one day and saw a book on the shelf with the magic title!  Could it be the same?  Written down in a book, so I could read it any time I liked?  It was, of course, and to this day I still go back from time to time to Missenthwaite Manor and Mary, the spoilt, grumpy Anglo-Indian child who so captured my imagination as she learned that the whole orange doesn't belong to any single person.

Not counting reading  which is basically just like breathing, I love cooking and am constantly scribbling down recipes, a large number of which I find later and wonder why on earth I ever thought I'd use them.  I sing with two choirs, and travel is a particular delight - to anywhere, really, but a year when my husband and I don't get our fix of French life and cuisine, however brief, feels like a year wasted.  The other great hobby I have acquired in recent years is grandchildren - the best fun of all.

Edinburgh is so full of fascinating things to do it's hard to know where to start.  There are romantic sights like the castle (we have a view of it from our upstairs balcony) and Holyrood Palace, with its shades of Mary Queen of Scots and her murdered secretary Rizzio, and art galleries and museums.  Next week, the Queen's Gallery has an exhibition of Royal Treasure including Faberge eggs and ancient Inca crowns, which looks irresistible.  Then of course there are our new resident pandas at Edinburgh Zoo.

But for something a little off-beat, I'd suggest Mary King's Close.  In the Middle Ages, Edinburgh was hit by the plague and in a desperate attempt to contain it, a whole street of houses was blocked up with its residents left there to die.  Over the years it was built right over, and underneth the Royal Mile, the street in Edinburgh that runs from the castle to Holyrood, there is a warren of these tiny old streets, grim and macabre and, according to the guides who take you round, full of restless ghosts.

PD James's Adam Dalgliesh has always been my favourite - sensitive, poetic, with a penetrating intellect.  However, now he is married and retired from the scene, I have developed quite an attachment to Camilleri's reprehensible Inspector Montalbano. 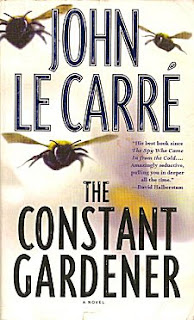 John le Carré's The Constant Gardener.  It is a serious  literary novel, but still has all the elements of great crime fiction -  and a moral purpose too.  After I read it I said to my husband, in some despair, 'Oh dear, I don't know why I bother!'

I've always celebrated a new book with champagne, and a friend threw a surprise party for me the first time with a cake made to look like the book cover...  I remember when I first saw it in Hatchard's elegant bookshop in London's Piccadilly - I gave a loud squeak of delight and surprise, and then was hugely embarrassed when everyone turned to look at me!

The most humiliating was when I shared a signing with another quite well-known Scottish author at lunch time in a small town bookshop and all we had to do was talk to each other.  The only comfort was that at the end I had sold twice as many as she had - 2 to her 1!

The most unusual event was at the book festival on the tiny island of Islay, off the west coast of Scotland.  They had invited a number of authors, with a full programme on the Saturday.  Unfortunately, a prominent member of the local community had died that week and, in true Gaelic style, the funeral started at ten and the wake finished at midnight while we authors talked to a small group of  festival helpers and their husbands, rounded up to paper the house.

Ebooks are certainly convenient, especially if you're travelling.  We could probably take twice as many clothes on holiday if our suitcases weren't always full of books, and it's comforting to know that you can download something immediately if you run out.

As an author, too, I like the freedom it offers; if what you want to write doesn't suit the gatekeepers in the publishing house, you can still get it out there - and often even prove them wrong.

The worst thing - if you fall asleep when you're reading an ebook in bed, it could break your nose as it falls from your grasp!


Thank you, Aline, for spending this time with us. We appreciate the opportunity to get to know you a little better.

Don't forget to stop by tomorrow for my review of Lamb to the Slaughter. Seriously... you need to read these books!