Lamb to the Slaughter by Aline Templeton 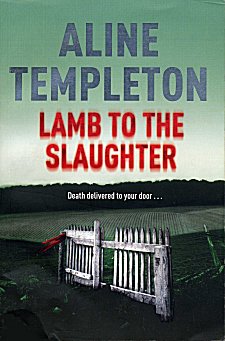 There is trouble brewing in Detective Inspector Marjory Fleming's small community of Kirkluce in southwestern Scotland. The town is fiercely divided over the plans of a superstore chain to open there. Half the citizens welcome the convenience and the possibility of more jobs; the other half knows that it would sound the death knell to most of the small shops on the High Street. Even farmers would be affected, since they would be forced to accept the much lower prices the new superstore would insist upon in exchange for their meat and produce.

If that's not enough, there's a group of teenaged boys who have too much time on their hands and not enough direction given them at home. They've taken to terrorizing an elderly lady on the outskirts of town, running amok on their motorcycles and doing damage.

When an old man who was opposed to the superstore is found gunned down on his doorstep and a second villager is the apparent victim of a random shooting, the press fans the flames of panic by announcing that there's a sniper on the rampage in Kirkluce, and the once bustling streets become deserted.

"Big Marge" has a lot on her plate trying to find the killer... or could it be two killers? Her right hand man is still out on sick leave, although the Robbie Burns-spouting Tam MacNee is doing his own investigating on the sly (and creating even more problems for his boss as a result). The most likely suspects seem to have iron clad alibis, while those who appear guilty simply cannot be. It's all down to good, solid, meticulous police work to get all the facts and put them together to find the truth.

For those of you who tend to steer clear of police procedurals or private detective stories because of blood and gore, there's no need to do that here. Aline Templeton depends upon character, motive and situation, not a proliferation of dismembered bodies, to weave a tale that will keep you up till the wee hours of the morning.

Her characterization is one of the main reasons why I enjoy her books so much. Her DI Marjory Fleming stands alongside Ann Cleeves' Vera Stanhope, Judith Cutler's Fran Harman, and Elly Griffiths' Ruth Galloway as my favorite British female crime fighters. Marjory is a force to be reckoned with on the job, but she has a husband who's a hardworking farmer, two teenaged children who can have her ripping out her hair, and elderly parents she wants to keep a loving eye on. Her constables and sergeants are also an interesting lot with their own foibles and intrigues. Watching all these characters work together is a delight.

Templeton does such a great job of misdirection that, by book's end, I couldn't believe that I hadn't seen the solution coming. But wait! Two of her most trusted investigators don't agree with Marjory's conclusions? Could Marjory be wrong? No, she can't be-- all the pieces have finally locked into the right pattern. Up until the very last sentence, the ending is an emotional rollercoaster-- and absolutely brilliant.

If you haven't read one of Aline Templeton's Detective Inspector Marjory Fleming books, you're, without doubt, missing some seriously good writing.