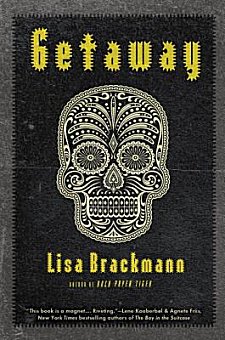 First Line: Michelle dropped the sarong she'd started to tie around her waist onto her lounge chair.

Michelle Mason needed to get away from her troubles for a while. Widowed a few months ago, she's been discovering just how secretive and inept a business person her late husband had been. The trip was already paid for, so a few days in Puerto Vallarta, Mexico seemed in order. She'd relax, calm down, get her head on straight, and then return to Los Angeles to finish dealing with the mess.

Trouble is, a handsome man named Daniel approaches her on the beach, they hit it off, have a few margaritas, and Michelle thinks, "Why not?" That one little decision has the power to change the entire course of her life.

Later that night, someone breaks into Michelle's hotel room and assaults Daniel. Her cell phone and Daniel's get switched, and someone named Gary forces Michelle to spy on Daniel. From what little Michelle is able to piece together, this all involves drugs, the people who get rich from selling drugs, and their hired hands who think nothing of torturing and killing to get what they want.  She knows she's in danger but quickly learns that running isn't an option-- or she's going to wind up in the Puerto Vallarta garbage dump.

This book is fast-paced and pulled me right in although I did have a difficult time warming up to Michelle. During the first part of the book, she's a typical consumer housewife, used to spending her days having lunch with the girls and buying the latest fashions. When I talk about sunglasses, I refer to them as sunglasses. When I talk about my purse, I call it a purse, and when I step into a pair of shoes, I have this annoying tendency to call them shoes. Michelle refers to them by their designer labels. She and I don't inhabit the same planet.

Besides her designer leanings, Michelle is used to the protection normally accorded to a woman married to a man of means and living in a big house in a large affluent American city. It's almost as if she's forgotten how to think for herself or how to survive without all the labels. When she first comes into contact with a corrupt Mexican police officer, she's completely unprepared, and she has absolutely no chance of getting past a villain like Gary.

And can she trust Daniel-- someone who seems to be involved in all this drug stuff up to his pearly white teeth? It takes her a while to realize that she is really fighting for her very life, and once she knows the real score, and begins to reason things out and to try to fight back, Getaway really takes off. Michelle doesn't turn into Lara Croft or Wonder Woman or Mrs. Peel, but she finds her backbone, and it's a glorious thing to watch. (I think I even cheered a time or two.)

Getaway may be listed as a thriller, and it does have all the action and fast pace of one. What's unexpected and completely refreshing is the fact that it is also an in-depth character study of a woman caught up in bizarre circumstances who's forced to fight for her survival when there's no one else she can trust.